My little boy has been acting out a lot lately. I don’t know if he’s teething, or if he’s just trying to assert his authority as an (almost) 3 year old, but it’s made for some very long days during the past few weeks. The screaming, the crying, the tantrums the bossiness and the blatant disobedience. It’s a lot for one mama to handle. 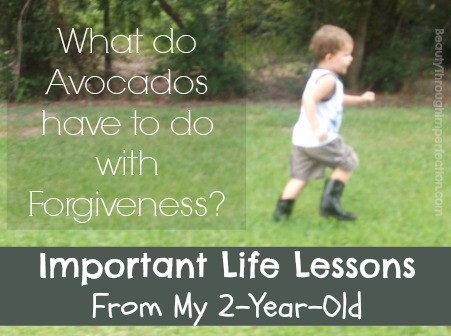 Today as we were making our way up the steps to our 3rd story apartment I found myself yelling at him. I was carrying his 20 pound sister in one arm and 20-30 pounds of groceries in the other, and he was refusing to walk up the steps. Just standing there. For no reason. And, ashamedly, I lost my cool and started yelling at him to “get up those stairs right this minute…”

I know that for some people it is not, but yelling is a big deal for me. I really try not to do it, I don’t like it and I really avoid it if at all possible, but I was angry today, and my poor curious boy bore the brunt of that anger. We made it up the steps and I eventually got all the food put away. I knew I needed to make it right with my little guy so I called him over to my lap and scooped him to to talk. I told him I was sorry for yelling at him and that it was wrong, I should not have yelled, and I loved him. He looked at me for a moment with his brow furrowed in deep concentration. I awaited his response, expecting something profound, or at least a small reprimand (like I said, he’s been bossy lately). When he spoke it was something else all together. As he stared me down with his serious look on his face, he asked me “can I have some avocado now?” and that was that.

No drama, no extra hardships or struggle to forgive my wrongdoing. He was over it and ready to move on to more important things, like those delicious avocados we had bought at the grocery store.

It struck me how amazing he is, at two, to grasp forgiveness so well. Because as I held him and sincerely apologized for my outburst, I was still  a little bit irritated with him for all his outbursts throughout the day. I was still holding his tantrums against him, and gearing up for a long evening. But my boy? Immediate forgiveness, as he rests in the knowledge of my love for him. I didn’t have to prove myself, or behave for a few hours before he calmed down and found it in his heart to quit stressing over my actions, he just forgave.

And my heart broke a little over my own actions, and my difficulty to forgive this small person who is so sweet and has his priorities so much straighter than my own.

Avocados are more important than how many times my boy and I have made mistakes today. We both love each other, and we’ll always be there, through thick and thin, through yelling and through tantrums. We’ll make it together, and we’ll say our sorries and he will continue to teach me about forgiveness and love. My oh so very wise two year old (who somehow can’t manage to make it through the day without screaming at everyone).

Life with toddlers is a wonderful chaos isn’t it? What have your kids been teaching you lately?