Did your Elf remember to move last night? I love waking up each day in December to new Instagram and Facebook photos of where the little elf was found that morning.

We’ve pulled together some of our favorite elf ideas and hiding places to help yours find new locations around the house all through December. 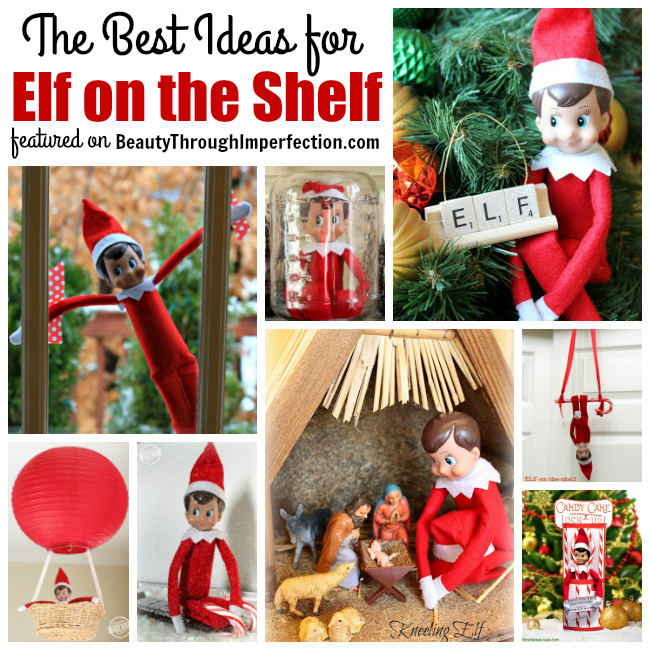 Have your Elf come flying in on a homemade paper airplane with this cute Elf flight idea.

Some elves are naughty, some are kind…this elf makes breakfast and tea for the kids and dolls and is a fun way to start the day!

See what happens when the Elf refuses to join the dark side… Vader has something to say about it and these Star Wars Elf ideas will have your kids laughing first thing in the morning!

This mom had a fun idea to let her elf bake Christmas cookies for everyone…since he’s small though they ended up tiny and adorable!

This mom had fun elf backdrop ideas you can print from her site for free to pose your elf in front of them in various places in your house.

After a particularly naughty hiding place the day before, try making this candy cane jail to lock up your elf in the most adorable way! There is a free “jail” printable that goes with the idea too!

Sometimes he tries to hide, in plain sight… like the time the elf had the idea to hide in a glass jar.

Try making a photobooth for your elf so he can get all of his selfies in before Christmas. There are free printables that go with this fun elf idea too.

Be sure to check out these elf idea shortcuts to help you keep up with the tradition without stress!!!

Even elves need pampering… try making a massage parlor for your elf. This will definitely be his favorite idea of the bunch!

Elf could bring in a new ornament for the tree, showing his name spelled out with scrabble letters.

While it’s not a hiding place… you’ll love munching on these Elf shaped cookies while you ponder where to hide your elf each night.

Your elf can take to the indoor skies with this cute homemade elf hot air balloon idea.

Don’t mind this elf…he’s just hanging out, swinging from the candy cane.

Since the kids can’t TOUCH the elf, let them interact with him, through this adorable elf dunk tank game. Fair warning that they will probably be sneaking as many marshmallows as they shoot at the elf…

This naughty elf started sipping santa’s milk, the kids will love finding him hiding in the fridge!

Elf ideas from our affiliate…

Do you have favorite elf ideas? Share with us in the comments!