During a lot of nationwide traumas, I have been able to keep my kids relatively uninformed. But the last few years, they’ve dealt with more than their fair share of traumatic events.

We went through hurricane Harvey, which while stressful, thankfully we didn’t flood.

Last year, the kids watched their house flood in real time, while sitting on barstools. And we still haven’t moved back home yet (rebuilding a house takes a LONG time).

Their first look at their house with no floors and missing 4 feet of walls. They thought it was hilarious and want their rooms connected forever. 😂 These two are the best little troopers. 😍 #byewalls #byefloor #byestuff

And now, school is canceled and we’re “social distancing” for… who knows how long.

My husband and I tend to stay pretty calm during crazy situations like this. I’ve had depression and anxiety for over a decade so my coping skills are pretty solid. But dealing with stressful situations with kids and helping them manage their big emotions is something else entirely.

The kids are on edge, and understandably so!

Even if you’ve kept the news OFF, and have kept things positive at home, you never know what kids might have already heard about what is happening. Sometimes, kids overhear things and re-interpret them in their own way.

Tonight, when we were talking about it, I found out that a child at my daughter’s school had been talking about this situation in a way that made my 7 year old think that anyone who contracts the virus dies. She was understandably worried, and the death rate of the virus would have never been something I would have thought to talk to her about, if I hadn’t known she’d heard and misunderstood some information from another kid.

Instead of assuming what they know, make sure to ask them what other kids have said or what they think about what is going on before you tell them the “right” answers. 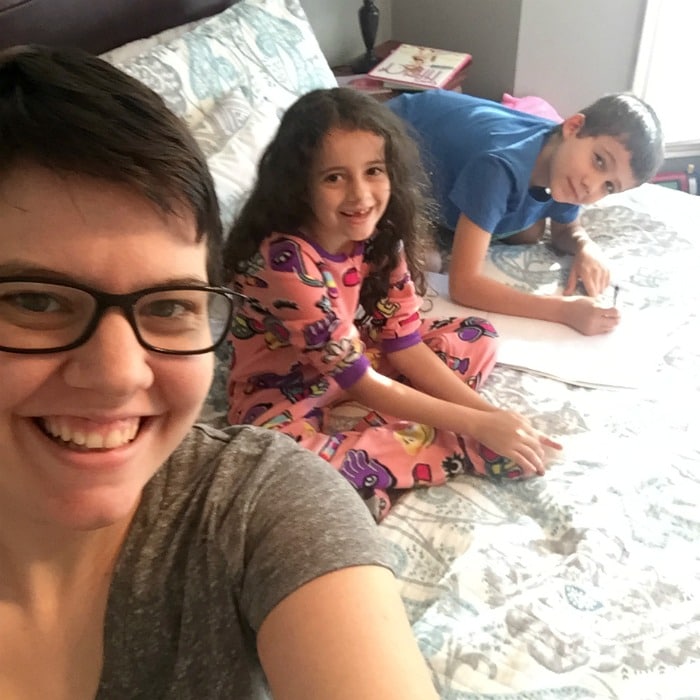 Give space to talk about worst-case scenarios

Kids are often scared to say what they are really worried about because it feels like saying it might make it true. Tonight, when we were talking my daughter at first said she was “upset about a lot of things” and mentioned 4 or 5 things, some of which were years-old grievances that I knew she wasn’t really concerned about.

I gently reminded her that talking about something bad won’t make it happen, but it does make it where other people can help you not be so worried.

After that she shared how she was concerned that her dad might get sick because he had gone to the grocery store, and her friend had told her almost everyone who gets sick dies. YIKES! I would have been crying too.

After she explained how she was feeling and her worries, we were able to talk about the right things, instead of me just guessing what was worrying her (or suspecting she was just trying to get out of going to sleep).

Kids can usually tell when they’re being misled. So do your best to share honestly (though, maybe not entirely) about the quarantine situation. I’ve explained to my kids that we’re staying home, not because we worried, but because we want to do our part to help make sure fewer people get sick.

Kids love helping and they love understanding what is going on! This situation became a lot less confusing and worrisome for them when they realized they were helping in some small way.

I would love to hear from you too! How are you talking to your kids about this situation? Had they heard any crazy rumors from other kids too?