As I sit here typing the rain is still falling. That’s been the one constant for every hurricane harvey update I’ve given.

I’m seeing photos of the waters receding in Downtown Houston and it brings a little hope that an end to these waters could be in sight.

Here's another shot of I-45 taken around noon today to show how much the waters have receded. #hurricaneharvey ??????

Where I live in NE Houston we’re still dealing with more flooding and today, many were evacuated from their homes.

Our house is still dry and safe so my sister in law and I walked over to a local middle school which was (at the time) an evacuation point to try to help. They weren’t in need of more volunteers so we went for a walk to see the waters in our area. 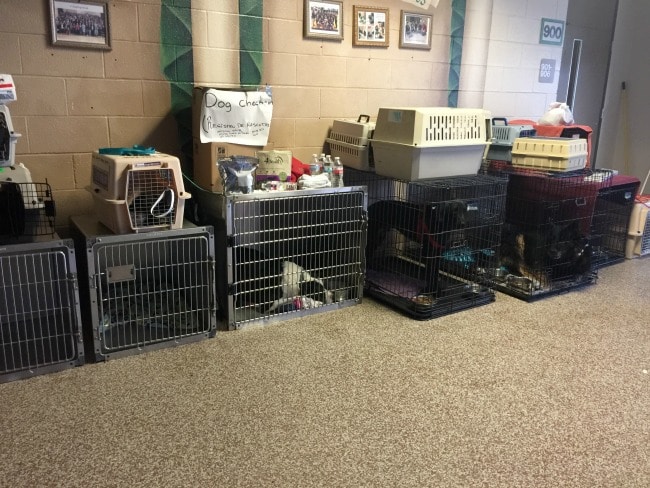 Down the street not far away we found the lake (or river, I don’t even know what we are calling it anymore). Even though I’d seen photos and videos from other, I honestly wasn’t really prepared to see the roads full of water. 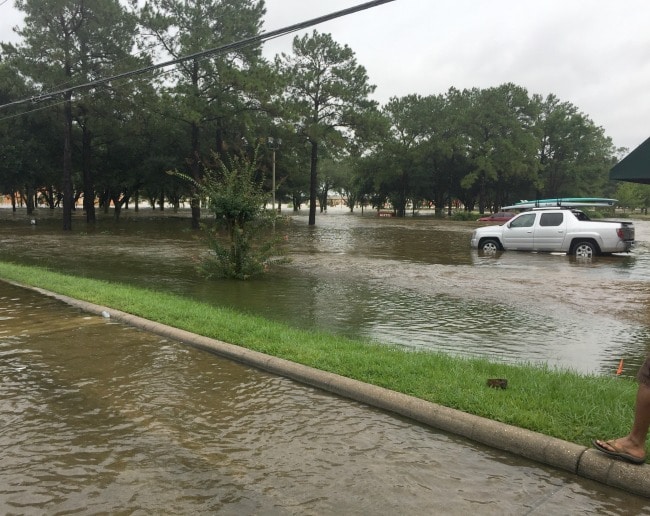 The tan/orange building in the top left of the above photo is our flooded grocery store. All the other closest grocery stores to us have either taken on water or closed down because no employees can get to work. 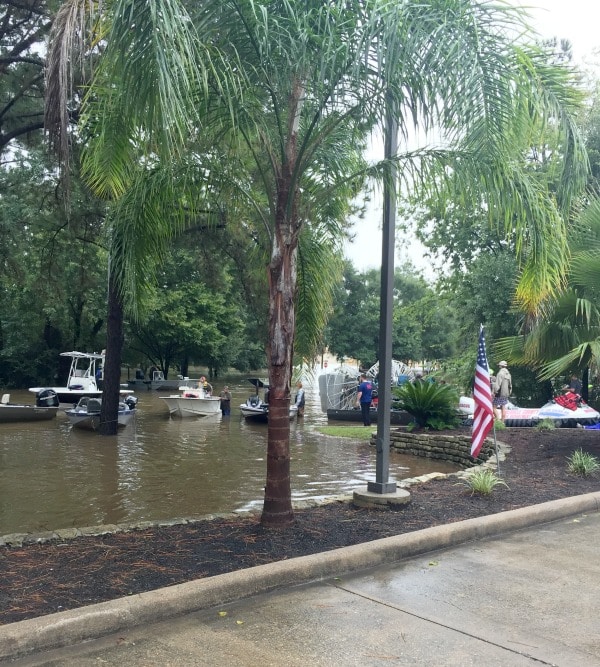 Where I took this photo we are 2.1 miles from where the river/lake is normally. It has risen to here and they are now releasing boats in front of our local wendy’s.

The words I’m typing honestly don’t seem real, but they are true. 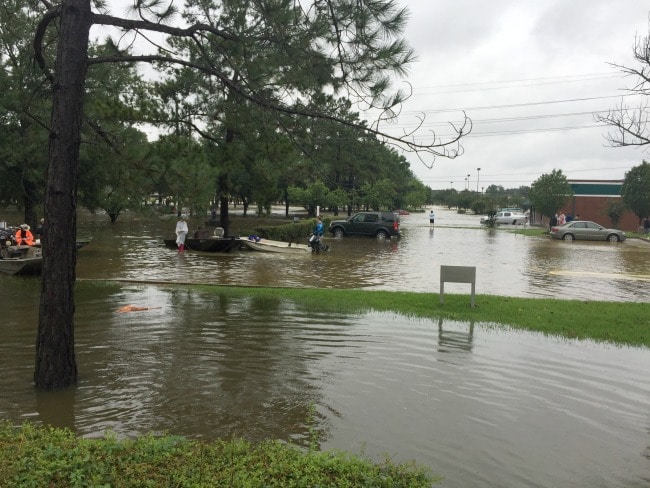 We stood and stared in silence for several minutes but it never seemed real.

I wish I had adequate words to tell you what this is like.

It’s so quiet outside. 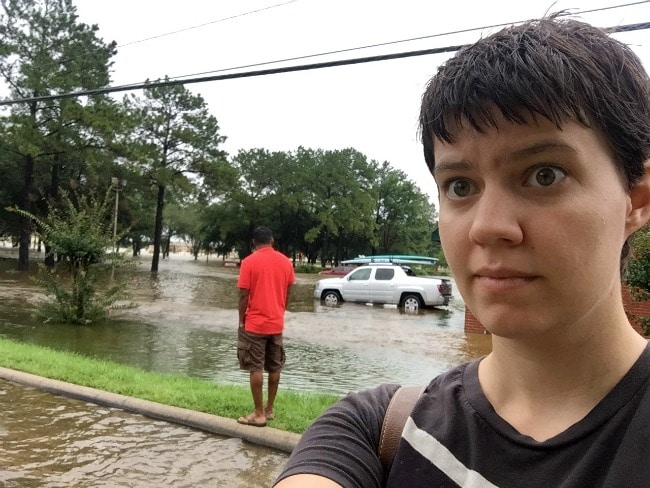 As far as I can see there is water. It’s here in our stores and neighborhoods and covering our roads with several feet of water.

We stood with a group of people but almost every one was silent. The few people who did speak used solemn, timid whispers.

I think we are all still in shock of what has happened to our city.

Posted by Beauty Through Imperfection on Tuesday, August 29, 2017

Even now as I type, the fact that there are MILES of water where there should be land and it is still not really sinking in.

Helicopters fly over every little while. While we were at the middle school we watched them evacuate some elderly people via helicopter. I don’t know where they were taking them, but somewhere better than a middle school I hope. 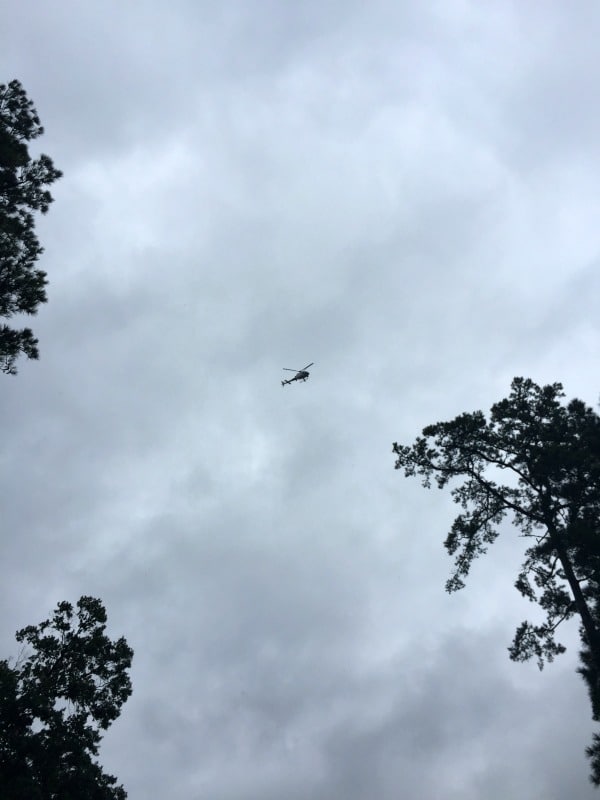 There is so much devastation and sadness all around, but little glimmers of hope too. While we were sad to be turned down from helping at the transition center, we’re grateful that there have been SUCH an overflow of volunteers in our town that we weren’t needed right now.

We saw boats and trucks from Florida, Louisiana, and Tennessee. Texas is not alone, and it’s so encouraging to see so many come along side us right now.

Every few hours we all send and receive many texts like: “are you okay?” “Do you need any help?” “Is everyone you love safe?”

It feels so strange typing the same words over and over each hour, but each time I hear “Yes I’m still safe” I breathe a little easier. 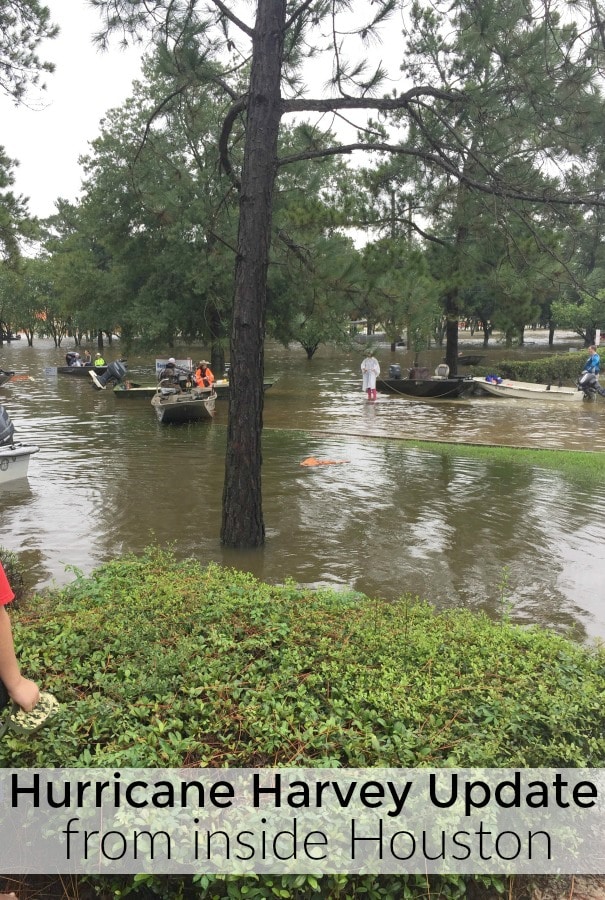 Right now there is a huge river between us and the rest of the city (the water was up over the interstate earlier today, so we can’t get through – I don’t know what it looks like right now).

When the waters start receding here, I don’t know what life will look like.

Grocery stores and restaurants and gas stations are flooded. People’s homes are under water.

I don’t know how our city will begin to rebuild. Where do you even start when there is devastation as far as your eye can see?

I have no idea. But I do know we won’t be alone in the rebuilding and it helps to know you all are out there cheering us on.

Harvey seems to be on his way out. But the waters are still here. I don’t know how long it takes for them to go down, or how much water has to be funneled out of other places in our direction.