I’m so happy to be introducing you to Gabrielle from MamaGab today! I love her reading her blog so I was thrilled when she offered to do a guest post for me!!! Today she’s doing a confession post about life with 3 kids. I’m especially interested in this since we only have 2! I thought it was a wonderfully honest, yet encouraging post! I hope you love it as much as I did! You can find more posts in this series “Confessions of an Imperfect Mother” by clicking on “the series” tab in the menu above.

“I don’t know how you do it with three kids,” is something I hear a lot from my friends.  They usually say this as they watch me loading the boys into the double stroller, commanding my oldest to hold onto the stroller while in the parking lot, and juggling diaper bags and pot luck food while I make my way out to my minivan.

Families today often choose to stop at only one or two children.  Quite frankly, it’s not for me to judge the motives or decision behind this.  Other families long for more than one or two, but that decision was made for them by health or fertility issues.  But many families stop at one or two because adding anymore children into the chaos is an idea that completely overwhelms them.

And I get that.  Let’s be honest.  Having one or two children is already pretty stinkin’ hard.  Friends watch me do my juggling act with three kids, always arriving a bit late and more than a little bit frazzled, and that’s when I hear their compliments.  Or sometimes I even hear their apologies: “I shouldn’t complain to you!  I’ve only got two kids!” 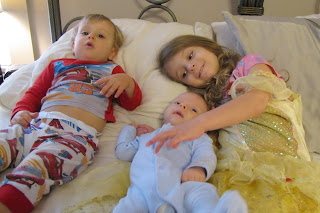 In some ways, I’d love to keep my SuperMom cape on, letting everyone think I’ve got these amazing super powers, but instead, I’ll debunk that myth.

It’s not that hard.

With the first child, there’s a huge learning curve.  You spend all of your time figuring out what to do, how to respond, when to nurse, how to cook and clean with a baby, and then they get mobile and the real fun begins.

With the second child, you realize that babies really do have different personalities, and what works for one child probably won’t work for the second.  During the day, you’re completely outnumbered and it seems like there’s not enough of you to go around.  Your older one needs something but you’re feeding the baby.  Or the baby is cranky and the oldest gets hurt, and now you’re stuck with two screaming kiddos piled into your lap.  If both of your kids are under the age of 4, it’s especially exhausting.  But at some point, you hit your stride, get in the groove, and for the most part, you get really good at juggling.  There are really rough seasons, but you muddle through and in time, things get easier again.

And the third baby?  It’s more of the same.  With one difference.  Now your older two are just a tiny bit older than they were before.  And every month, they get older, bigger, and more mature, more independent.  In fact, they can actually help.  And the best part?  The best part is that they can entertain each other.

Mommy is different now too.  The things that worried you with your first baby and your second baby really don’t worry you anymore.  You have some confidence.  Before having my third baby, I’d spent a total of 30 months breastfeeding the other two kids.  I really had no worries about that.  He won’t sleep through the night?  Oh well, there are bigger things in the world to worry about.  No desire for solid foods?  No big deal.  He can survive on breastmilk alone for a while longer.  And that What to Expect, The First Year book?  It’s sitting on my shelf, collecting dust.  I don’t bother checking it for milestones.  He’s happy and developing well.  I know he is, because this isn’t my first rodeo.  In fact, I haven’t even had time to forget about those first year milestones because I just went through it.  And there are rough seasons when the house is in complete disarray, but I no longer stress too much over it.  It’ll get clean again.  And then it’ll get messy again.  That’s the way it works.

What are the challenges of 3?

With three kids, someone nearly always has a runny nose during this time of year.  It’s just life, but again, you deal with it.  But when the kids are really feeling yucky, the well-oiled machine falls apart.  I had a very mild tummy bug one day last week, but it put me seriously behind on housework, cooking, Bible study, laundry, and every other activity around the house.

Having three children, especially three little, little children, like mine, is more of a logistical nightmare than anything else. Mommy and daddy kind of have to do everything, since no one can bathe themselves. I’ve done road trips by myself with the three littles, and it’s kind of crazy when I have to potty, since my two oldest can’t open the heavy gas station doors for themselves and I’m trying to carry one of those big infant carseats.  Every day tasks such as getting through the grocery store, unloading the car, and and putting away groceries are incredibly, ridiculously hectic.

At the same time, however, I’m so used to the diapers, burp cloths, and breastfeeding stage that it’s not that big of a deal to be in it once again. And my two big kids–I use the term big in a relative sense, because they’re 4 and almost 2–are into the same things. They can build blocks together, play trains together, and dance to silly toddler songs together. They both enjoy watching Dora, Blue’s Clues, Mickey Mouse, and Little Einsteins. I don’t have a big kid to roll their eyes about having to sit through another episode of Kipper.

I remember the day I saw those two little lines on the pee stick pregnancy test.  My oldest was about to turn 3 and my youngest was 10 months.  This was the first time we’d been surprised by a baby.  I decided then that this year with three tiny kids would be both the most fun and the most exhausting year of my life.  So far, I’ve been right.

What are your thoughts on adding more kids into your already busy life?  And what was the hardest adjustment for you?  Going from 0-1, 1-2, 2-3, or more? 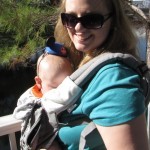 When she’s not tripping over toys or cleaning up spit-up, Gabrielle Daigle blogs about authentic motherhood, walking with God, and all things related to homemaking.  She loves baking, learning from other women, and encouraging moms through serving locally in MOPS (Mothers Of Pre-Schoolers).  You can follow her blog MamaGab or find her on Facebook and Pinterest