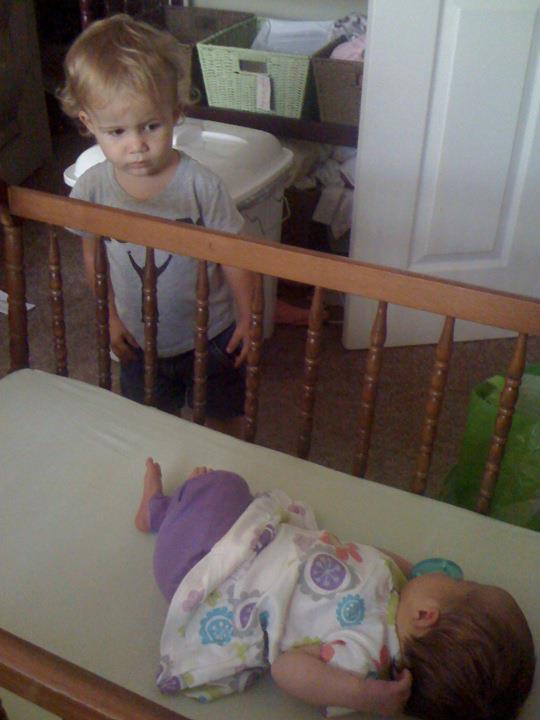 As I said in the last post our transition to a family of four is going easier than I expected it to…. BUT, that does not mean has been simple.

My recovery is going GREAT. It has only been 9 days but I already feel almost back to normal physically.

Hubby is doing fabulously. Working hard at work as always but still coming home with a smile on his face and ready to play with the kiddos for an hour or so before bedtime.

Little man… is having a bit of trouble. Before baby girl was born he was pretty much done with tantrums. We had a few rough weeks but then he got past it. Whining had been a thing of the past for a few months before she came, but now that she’s here he has been throwing fits about random things and whining a lot more again. The first few days we were home with baby girl were quite challenging, but he is slowly getting better. I feel like it’s all just for attention. Even though he’s really not getting much less attention than he was before, he is having to share my attention which is a new concept and quite a difficult one when you are only 21 months old!

Before baby girl came Little Man would voluntarily go play by himself for 30 mins to an hour multiple times a day. I wasn’t giving him 1 on 1 attention every minute of the day, but he was getting a lot of attention (and still is). I’m trying to handle the tantrums and whining in much the same way that I did before, since it’s familiar to him, and it worked once already! But I’m also realizing that he’s throwing fits because he’s adjusting and probably feels like he needs more attention. So after he gets past the tantrum I try to be sure to give him an extra amount of attention. A few minutes later so it’s not coming across as a “reward” for whining/fussing, but close enough so that he is comforted that he’s my baby too and that’s not ever going to change ;)

As we’re slowly creating our new routine I’m discovering how helpful it is to Little Man when I spend 1 on 1 playtime with him. He enjoys it when I play with him while holding sister, but his face lights up and he really thrives during the times when we play while she’s in her swing or taking a nap. I realized today how important that is to him, and what a difference in makes in his behavior.

This has meant sacrificing some time during the day that used to be ‘rest time’ for me. In the past I would read a book or surf the internet on my ipod while Little Man took a bath, but today he wanted to play with me, and so I sat outside the tub and we played during his entire bath. Sister was in her cradle sleeping and we had a good 30 minutes to ourselves. He LOVED it. The joy on his face was utterly priceless, definitely worth the ‘sacrifice’ of a few chapters in my book. We found one other slot of time during the day that we could spend just mama and Little Man today and it was wonderful. I am planning to start being very intentional about having those times every day with him.

I have been working on not “pushing him away” with my words when I’m busy with sister too. If he is asking for something that I can’t get for him because I’m nursing her, I try to make it clear that he needs to wait a minute until she’s done, and then I try to be sure I get whatever it was promptly when she’s finished eating and/or burping. He’s starting to trust that I really will help him when she’s finished and slowly getting more patient. At least once a day while I’m nursing her we will sit on the couch and I read stories to him. Little Man loves to read and I love that reading is a way that he can be “involved” in feeding time and not just left to himself. He doesn’t always want to, but it’s nice having that as an option to include him. Baby girl will probably enjoy the stories as she gets older too! <3

He has also tried to be sneaky about being naughty while I’m feeding sister. I think at first it seemed like a good time to misbehave because my hands were full, but a few days of me jumping up (while still nursing her) and dealing with whatever he was doing wrong, and he is starting to realize that just because my hands are full of sister doesn’t mean the rules are changing. I knew I would have to be very consistent about that the first week, and it is really paying off! The first few days I couldn’t nurse her without him getting in to something, but now that he’s realizing I will still get up and deal with him in the same way that I would if I wasn’t nursing her, he is calming down and only attempting disobedience during nursing time once or twice a day. Consistency really is key! Especially at the beginning. I went into expecting to need to do that, and so it wasn’t a shock. It made for a tiring week, but it was definitely worth it.

All in all it’s going well, but these are some of the challenges we’ve faced this week, and how we’re getting past them. Already our home is starting to feel “normal” again, even though our normal has been drastically changed. We’re creating a new routine and every one is becoming more at peace as we move forward together. Transitions aren’t easy, but they are easier with the ones you love by your side! <3

Any one have any thoughts or tips about helping toddlers as they become big brothers/sisters? I would love to hear your experiences!!!