We were standing in the lobby of the library. I was trying to leave, wanting us to go on to yet another errand on my list of things to do with my 1 year old daughter and not-quite-three year old son.

Of course they stopped.

Of course when they noticed the interesting metal flooring in the doorway they couldn’t help but jump on it in their little boots, making enough noise to compensate for how quiet they had to be as we looked for books inside. 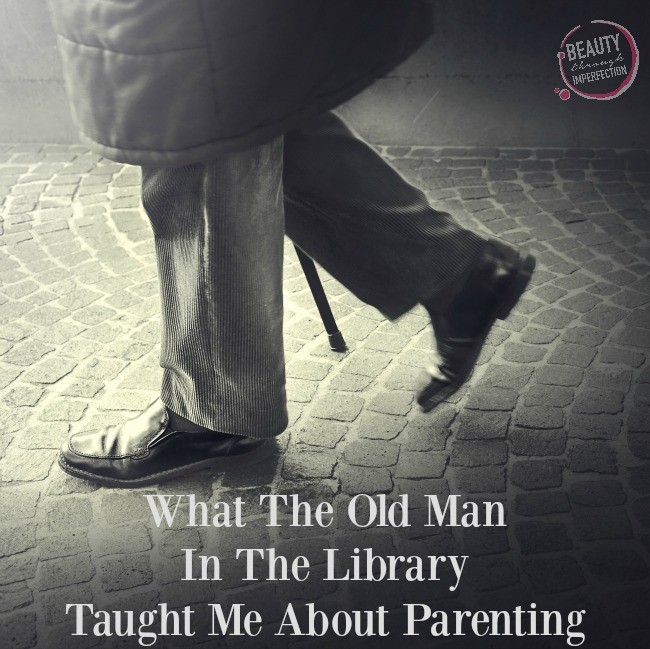 So we stopped. We held hands, and we jumped on that metal grating as they giggled and I inwardly rolled my eyes. I allowed this small break, knowing that even though we were delayed, it was much easier to go with it and let them jump than it would be to drag them out of the library, annoyed by yet another childish delay, in the midst of an overstuffed schedule.

I made sure we stayed out of the way of other library patrons as they jumped and laughed. I ensured they weren’t too loud… just loud enough and let them pause for perhaps 2 minutes.

As I gently prodded them out the door an old man approached. I was certain that he was going to tell me to grow up, to learn how to control my kids or that we were in his way, though we were clearly not blocking the path…

But that sweet old man had something different on his mind.

“it’s good that you do that” he said.

I wasn’t quite sure what he meant, so I said thanks and made to walk away with my kids.

He grabbed my arm and looked me in the eyes with a special little sparkle in his as he said “no really, you are a great mom. To stop and let them play, those little moments mean more to them, than you think”.

And then I smiled and I cried as we walked out to the car. My inner eye-rolling was replaced with a gentle but beautiful message from the stranger in the library.

The one that told me I was being a good mom when I didn’t even realize it. The one that showed me how to be a better one, how to hunt for those little moments, those giggles that make our days so much more fun.

We’re a noisy family. Because we stop, and we laugh. We jump in puddles and we sing songs in the car. The littles ask obnoxious questions and like telling me what to do.

It’s this beautiful chaos that we have going and I love that sweet old man in the library for teaching me how to embrace it. For showing me that it’s okay to stop for 2 minutes in the middle of rushing to giggle. To enjoy my kids because they won’t always be tiny.

I have no idea if he was remembering his own kids, his grandkids or maybe even his own childhood, but there was a memory there that he couldn’t quite share. But because of it, there’s a list of memories I’m making with my kids. Silly ones, inconvenient ones, and sometimes even noisy. But we’re embracing this beautiful chaos together instead of ignoring, or simply tolerating.

Are your kids teaching you to embrace the unexpected and sometimes chaotic? What’s a silly little thing you’ve done with your kids lately to make them giggle? Or what’s one you can do with them soon? Share in the comments!

For more encouragement, I ‘d love to share an ebook I’ve written titled Confessions of an Imperfect Mother.  It’s for sale on Amazon, but I’d love to give you a FREE copy for subscribing below. I also send weekly notes of encouragement straight to your inbox and you can unsubscribe at any time.