If you’ve been following awhile, you probably know that we just bought out first house! It was a long time coming and I am still having a hard time believing that it’s actually ours! Instead of our little girl sleeping in the dining room, she has her own pink room while her big brother has his room painted the pretty blue that he selected! Where we used to be stuck indoors a lot of the time, we now have a backyard where the kids beg to spend most of their time.

We’re still settling in, unpacking and decorating and since several of you have requested it, I’ll be sharing photos periodically along the way!

A couple months ago I was contacted by a friendly gal from CozyWallArt.com asking if I’d like to review a decal. We weren’t in our house yet, but since we were moving I said yes! My son loves animals, so I was immediately drawn to the monkeys on the bed wall decal. We ordered it and anxiously awaited it to arrive at our new house (it ended up being our first package EVER at the new place).

Any one who has ever moved with kids knows how stressful it can be on every one. The day the decal came, my son was in full-on melt down mode. Screaming, crying and completely inconsolable. I opened up the package to show him and found the most glorious treasure. They had included a few lollipops in a little bag next to the decal. I probably don’t have to tell you that our day turned right around immediately. I love little touches from brands like that and it totally made our day! 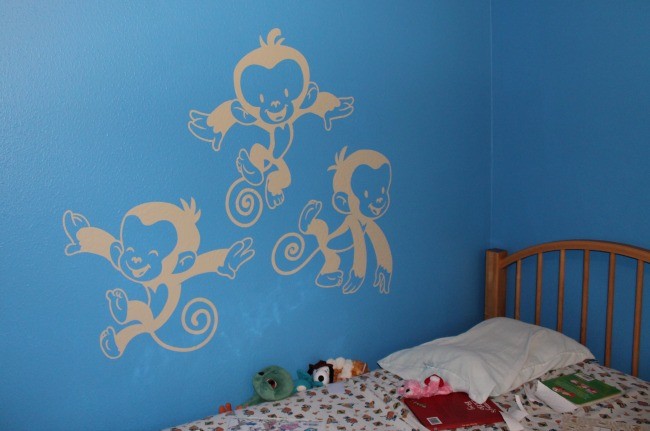 Anyway, on to the decorating! We painted my son’s room blue as he requested and I pushed his big boy bed up against a wall so that the monkeys look like they are jumping on it.

I had never done any type of decal before so I was nervous about trying it but excited too! I was really impressed at how easy it was. It was tedious but I was able to do it by myself in under an hour. 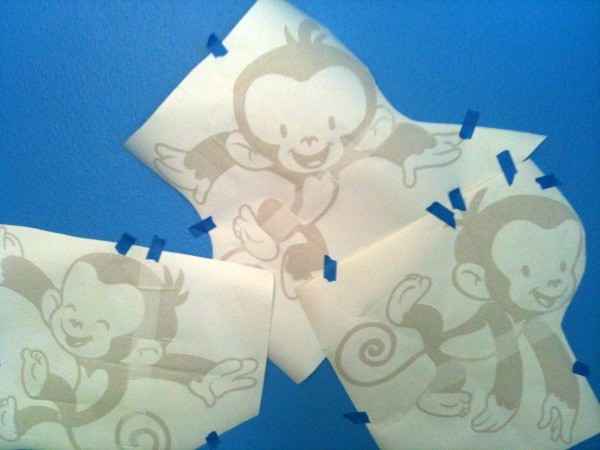 I taped them up to decide where I wanted them on the wall and then carefully peeled them one by one and applied them to the wall! The intricate little fingers and toes on the monkeys were a bit of a challenge but we made it happen and Little Man is so excited to have the monkeys on his wall! He’s decided that the middle one is George. *wink*
If you are wanting some adorable decals for your child’s room, or other parts of you house I definitely recommend Cozy Wall Art!
I’m very slowly getting decorations up in the rest of our house so there will be more on that to come!
Also, if you are looking for organizational tips for your child’s room or playroom, be sure to check out this post!
*I was given the monkey decals for free in exchange for my honest review. I never review products that I don’t LOVE, and this was a particularly fun one to do because it’s something my kids and I really enjoy!