This post was sponsored by Hasbro as part of an Influencer Activation for Influence Central. I received a complimentary product to facilitate my review.

You ever have one of those crazy weeks where one big thing goes wrong and then about a thousand little wrong things happen in it’s wake?

That was this week for us. And while it ends up okay (with the discover of a new game, thank you Hasbro & Pie Face…) the start was rough.

Last week was long, but okay. Nothing particularly stressful, just a little non-stop. My husband worked a couple extra days and I was finishing up a book I’m writing so we were strapped for time and ready for a good rest over the weekend. He went up to work Saturday morning to finish a few things and I stayed home with the kids and a massive pile of laundry (turns out writing books, and doing laundry don’t really go together).

Between loads I was making lunch when it happened. The kids were playing happily in the living room, until that moment my daughter fell and hit her head on the brick fireplace. She sobbed for half an hour, I was shaking and the biggest goose-egg I’ve ever seen on a human made itself comfortable on her forehead.

I did what any mama would do…I called my mother-in-law, who rushed over and called my husband to bring us the carseats so we could go to the ER. Her first trip to the emergency room, and she walked out of it with the diagnosis of a fractured skull. Only terrifying.

Thankfully, it should heal on it’s own and I only have to make sure she doesn’t run, or jump for the next few days.

Have you ever tried to make a two year old not run, jump or spin in circles?

My daughter LIVES to spin, and twirl and jump around and most of all race with her brother around the house. “Sit still so you don’t hurt your head” just doesn’t compute.

She went to school tuesday, but came home early with a headache (she’s totally fine now, it was unrelated). Tuesday night, my son’s stomach decided it would be the perfect time to start emptying it’s contents all over the bathroom floor at 3am. and 3:30. And 3:45 and it kept on going until 5:30 which is approximately 25 minutes before sister woke up to play.

This week y’all. This week.

We’re all infintely thankful baby girl is okay. Her head doesn’t even hurt any more and the drs aren’t worried at all. My son’s stomach bug went away after that one night (though every one has still been up 2-3 times a night out of habit, all week).

So very thankful every one is okay. And exhausted. And, you know with all the thankfulness, as mom I sometimes feel like I need a break. I’m a huge supporter of mom-breaks (and dad-breaks too!) but some weeks it’s just not possible. Some weeks you are neck-deep in parenting and life and there’s just nothing you can do but keep moving on. That’s this week for us. We’ve got work, and errands, and grocery shopping…everything that goes with normal life, and then all of this stress on top.

But we’re here and we’re together and somehow that’s the most important thing. It’s easy to tell myself that sitting here in my favorite chair at the end of the night. Both kids are sleeping peacefully (for now… give it ’til 2am, I’m sure they’ll be up!), my husband is out for the evening and I have a precious slice of silence and peace to myself. So it’s easy to reflect and be thankful despite all the stresses and mistakes from the past few days.

But I want to somehow share this feeling with my kids. THey’ve felt the stresses and seen the worry on our faces. They know that this week has not been right, but how can I communicate that all is well, and that in the midst of all the not-right-ness having each other is enough.

Which is where a simple little box from Hasbro came in. I knew this box was coming, but I had no idea how much we would need it this week. How this little Pie Face game brought full on belly-laughs into our home during one of the craziest weeks we’ve had in awhile, and taught me an important lesson… Even in the worst of weeks, finding those moments of fun, laughter and time to play a special game with the kids, can show them that all is well. That being together is enough, even in the most stressful of times.

The look on my son’s face as we played is irreplaceable. I love that smile, it was truly a beautiful site after seeing him worry about his sister all weekend and be annoyed at not being allowed to run around with her all week. But then there was this smile, and all was well. 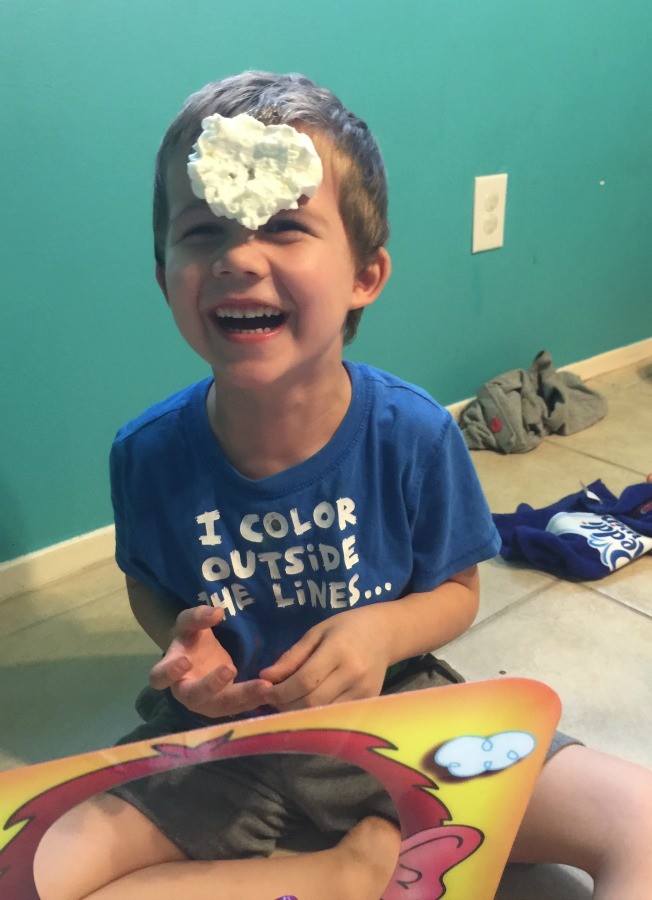 So, to play this game, you put together “the machine” (as my son calls it) – it’s about 4 steps and can stay together once built. There’s a spot to put your face and a little hand/arm to put Reddi Wip on.

I’m sure you see where we’re going with this… 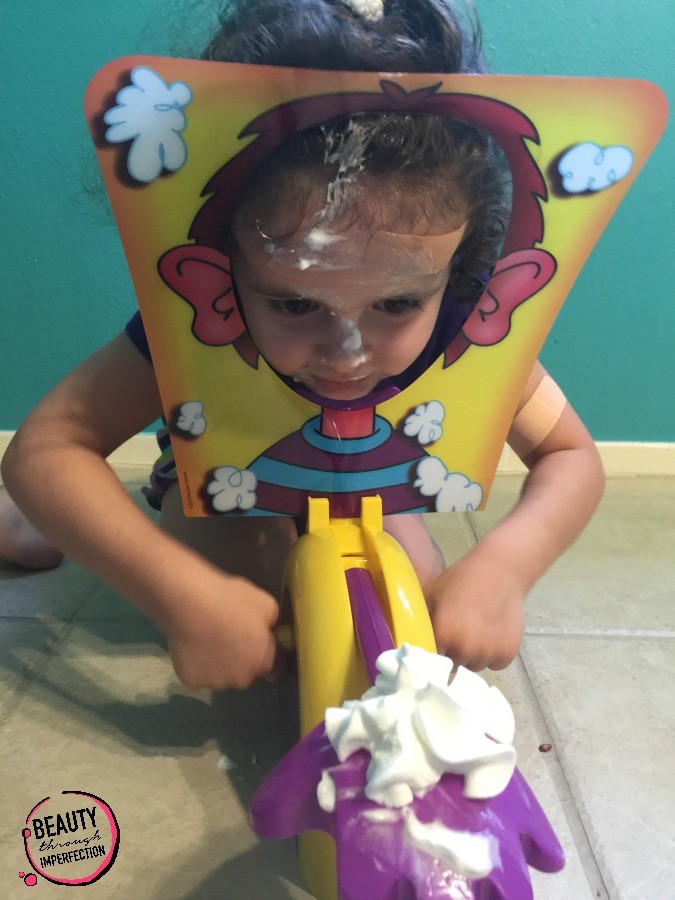 There’s a little spinner, so on your turn you spin to see how many tries you get. Whatever number you get is the number of times you rotate the levers. Sometimes a rotation pops the hand up and springs Reddi Wip ALL OVER your face. 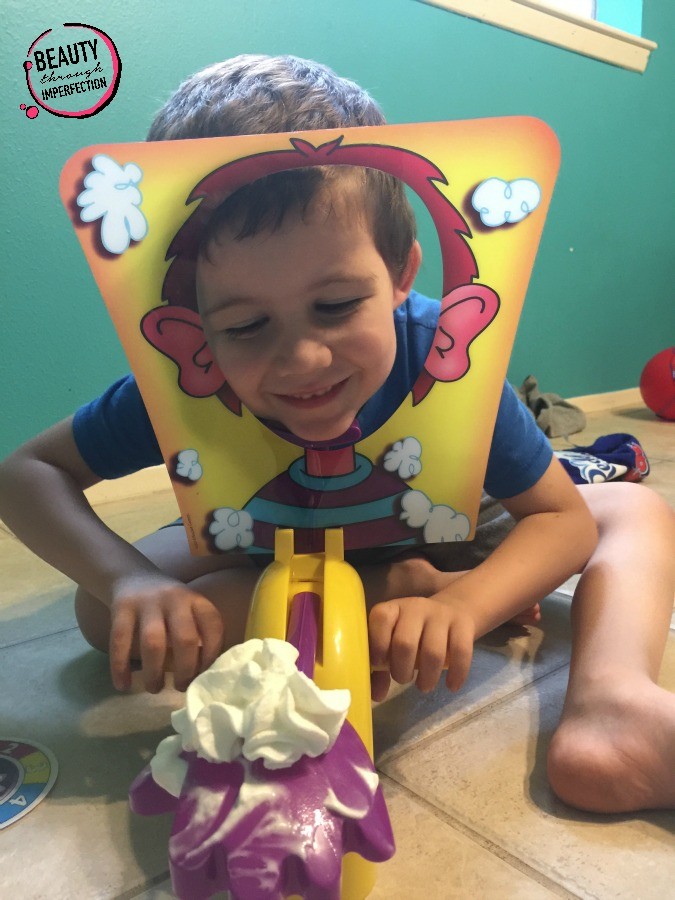 You never know when it’s coming, and the anticipation is just as funny as getting creamed! 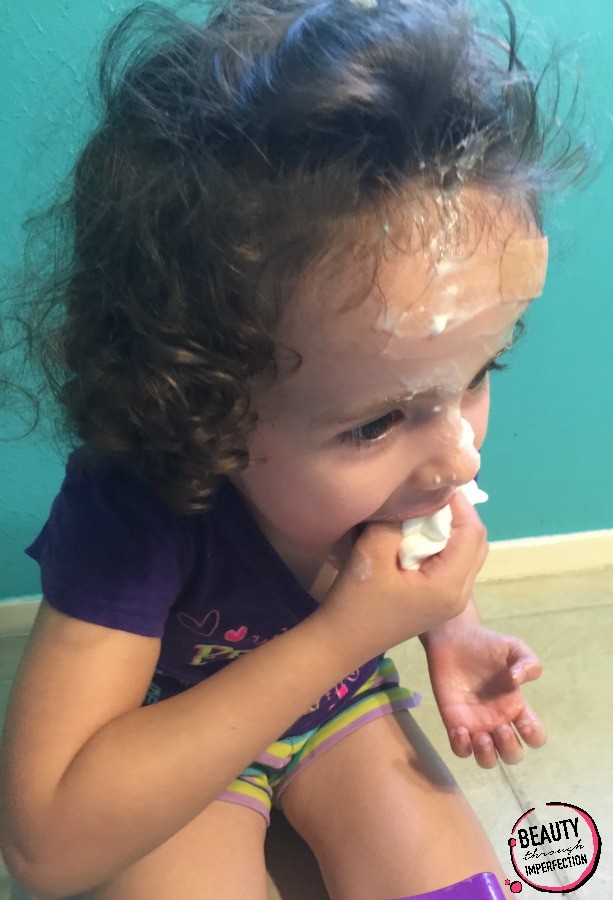 They couldn’t stop eating the cream and giggling. It was truly the perfect end to a really rough week and I’m so thankful for the sweet little lesson from Hasbro! This would make SUCH a good Christmas gift for the kids in your life! Or, if it’s a game you already have, share videos/pictures with me in the comments!

You can watch us play here…the kids keep asking to watch our video over and over, they think it’s hilarious!!!