While raising awareness has it’s place, I think more often than not, we’re doing it wrong.

Yes, it’s good to be made aware of things going on in the world around us that we might not have known previously, but this is useless if we don’t do anything about what we learn. 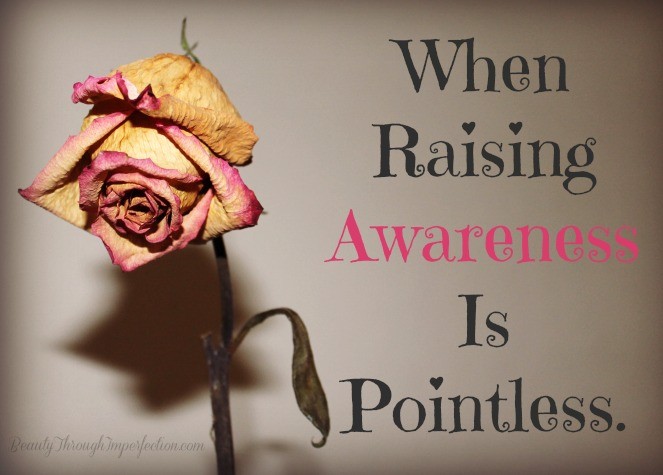 Awareness is not the only step. In fact, to stop there, being made aware of problems, only to turn away and do nothing or do merely enough to make you feel like you are doing something, this makes the awareness pointless.

After awareness, the natural next step, is to find your role in fixing the problem.

Now it’s true, we can’t fix every problem we come across. We can’t fight every battle. But we can fight some, and I think most of us are not fighting much of anything.

I remember a few years back in April, so many people changed their profile pictures to children’s characters for child abuse awareness month. There are all sorts of simple awareness efforts going on like this all aroud us. A red ex on the hand to end human trafficking, going barefoot for a day for the children who don’t own shoes. The list of awareness efforts goes on and on. After awhile, we become desensitized to it all.

Sure, we’ll change our profile pictures or share an image, but what are we doing that stirs us into action. What will be left of our efforts when Facebook is as empty as myspace and the ink has long faded from our hands. What then? What lives have been changed?

These days, people are aware of most causes, some still need to be spoken for, yes, please. But also show how people can make a difference. I do not want to be made aware if I cannot also help. If I’m not also being spurred into action. True action. Not a mumbled prayer until I feel better about myself, but collective hours spent on my knees or weeks (even years!) spent striving for change.

A profile picture doesn’t change lives, neither do *most* of the awareness efforts that we participate in these days. But they do make us feel like we’re doing something. They are enough to give us the warm-fuzzies and convince our hearts we are a part of something important. We are AWARE. But we aren’t changing anything.

Today, I encourage you to find your fight, and get engaged. Seek out organizations that are actively doing good to change something and find out how you can help. Maybe it’s financial gifts, maybe it’s the gift of time, and yes, maybe it’s prayer. But do something real. Don’t just be aware of everything, involved in nothing.

Create change in the world, it doesn’t need to be the entirety of the earth, but one child, on human life changed. Change their world. It will take more than a swapped profile picture or an X on the hand. Change is much harder, much messier and much less glamorous than that. In fact, people probably won’t see you working behind the scenes to change lives, but it can be done. It should be done.

Let awareness drive you into action this year. The kind that may be seen by all of your Facebook friends, but also might not be known by any except the person you are helping.

Again, you won’t be able to help every cause. We each only have so many hours in a day, but pray about which ones you should be involved in, and find out how you can help.

What causes are you most passionate about? What steps will you take this year to move beyond “awareness” efforts and into action?

disclaimer – I’m not trying to attack every awareness effort out there. I know that many of them are doing good. No action can be taken unless we are first made aware of an issue. But it should not stop with an X on the hand, a changed profile picture or a viral video being shared one more time. That can’t be the end anymore. We can do more than that. We need to do more.