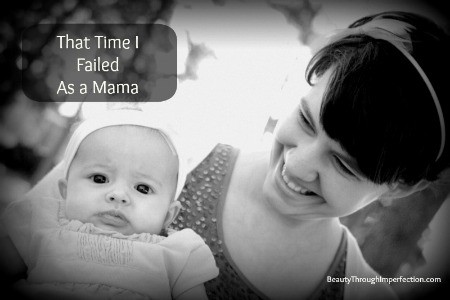 Today I took the Princess to the dr because she caught a little virus. Not a big deal, but the other info we found out was a bit worrisome.

Earlier this month she went in for her “well check” and we noticed that she had lost weight since her last check up. The dr didn’t seem too concerned because it wasn’t a huge drop and she had become much more active between visits. Something to keep an eye on but nothing to worrisome. Then today, we saw that she had lost weight again. This time just since her well check 2 weeks ago! Definitely not okay. Today was beyond stressful getting her all checked out for the virus and then finding out that she’s not growing the way that she should.

The dr. told me I needed to start supplementing with formula to giver her weight a little boost. Little Man was exclusively breastfed until his first birthday and I’ve been planning to do the same with Princess, but today she had her first bottle of formula. Not a big deal and yet, in the back of my mind, I feel like I’ve failed her.

Do you know what’s crazy though? I have lots of friends that use formula and I’ve always been the first to encourage them that it’s okay and can be an excellent choice for their baby. I’ve never once thought less of them as mothers or thought that they were failing their children for using formula.

Sometimes it’s not possible to nurse your baby, and sometimes your milk isn’t quite enough and you have to supplement and apparently, that’s okay.

If it were you and your baby  in this situation I would be supporting you 100% I would tell you what a fantastic mama you are and that there are more important things that exclusively breastfeeding your baby. I would tell you that it’s obvious that you love your baby more than anything and giving her formula twice a day is an act of love, even though you never expected it to happen. I would tell you that your motherhood is not limited by the type of milk your daughter drinks.

I would believe all those things if we were talking about you but somehow, I find it hard to believe them when we’re talking about me. So today, I learn to say those things to myself. To lower my impossibly high standards that I’ve set in place for myself. I learn how to make a bottle of formula and attempt to feed it to my baby girl for the first time. And most of all, I learn that I won’t always reach the goals and standards I set for myself.

This doesn’t mean I will ever stop making goals or striving to be the best mama that I can be, it just means that I learn to have the same amount of grace for myself that I would have for another mom. The same amount that my  hubby and friends have for me.

It’s hard to “fail” as a mother. But now, I’m just finding a new way to succeed, by helping my daughter gain the weight she needs to be strong.

It’s hard, stressful and wreaking havoc on my emotions – but we’ll get there, we always do.

Do you find yourself having more grace for other moms than you have for yourself? How have you found peace when you don’t “measure up” to a parenting goal you’ve set for yourself?