But really, another one?

Modesty is such a huge issue these days. It seems like once May hits, out come all the hard-hitting modesty posts that state what you are and are not allowed to wear for the sake of men and not causing them to stumble.

I’m a Christian and I also consider myself to be a pretty modest gal, but still, something about many of these posts rub me the wrong way. It’s like all the responsibility for men’s thoughts and purity lie on the (hopefully fully covered!) shoulders of women. I think this is just wrong. For every 12,000 posts on how women should be dressing, there is maybe one measly little post that barely sees the light of day about how men should be cautious of how they think and look.

I think it’s really just another case of people getting all focused on something that’s really not that important in the grand scheme of life and salvation. 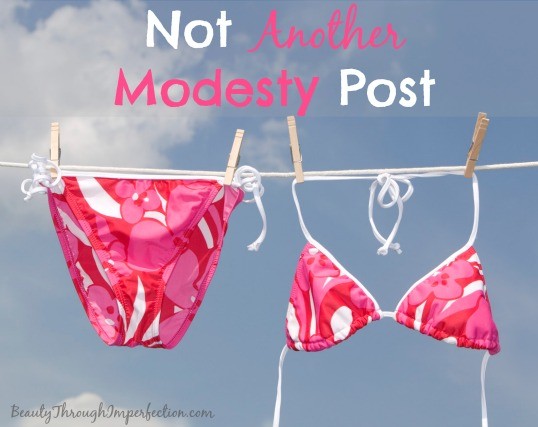 Yes, I dress modestly (under my personal definition of it), and I want both of my children, daughter and son, to do the same. To dress appropriately as they grow older. But really, it’s not a massive issue in our home. You know what is? Jesus.

And along with that:  Being loving with our speech. Serving others. Working hard. Modesty doesn’t even make the top 10 if I listed them in order of “importance” in our home. Is it important? I guess, to some extent. EVERYONE, male and female should be taught to dress appropriately. But, honestly I think I’m going to have more trouble with my son wanting to go around without pants on, more than I will have issues with my daughter wearing something inappropriate.

I want to teach my kids to respect themselves and their bodies, and with that, modesty just comes naturally. It comes without shame, but with empowerment and respect for your own body and the bodies of others.

To use an example, I don’t personally wear bikinis, but I also don’t have a problem with other people wearing them. It’s a personal choice and I don’t feel the need to involve myself in the clothing choices of any one outside my own home. I don’t cringe when we go to the beach because there are hundreds of “scantily clad” women who are going to “cause my husband to stumble”.

I don’t worry about it, first and foremost because if he’s having impure thoughts, that’s on him. Second, if he feels uncomfortable he just looks away. It’s not really that difficult. He is man enough to look in another direction if he’s having some rogue thought that he should not. I don’t need to go on a campaign to convince other women to dress at the same modesty/comfort level that I’m currently sporting. It’s just not that big of a deal. I’d rather focus on loving every one, regardless of their apparel, and use my time to point them to Jesus, not an arbitrary list of rules of what we should and should not be wearing. And I don’t say that lightly. Loving people takes considerable effort and time. It doesn’t typically come naturally to humans, myself included.

Also I think it’s important to note, that finding some one else attractive is different than lusting after them. I can look at my sister and see that she’s attractive, literally ZERO lust there (obviously). I could also see some random guy and note that he is attractive but that doesn’t mean I’m lusting after him or sinning any more than noticing that the kid I just walked past had a bunny on her shirt or has a cute button nose. It’s literally just an observation. Observations aren’t sinful, it’s when they develop into lust and imagining of sinful scenarios that we go wrong.

In short, we’re each responsible for our own choices, in what we wear and what we think about. We all have the ability to look away, and the authority to make the choice to wear more (or less) clothing.

That’s it. End of story.

Can we please move on to something else?

*disclaimer – I’m in no way saying that people who put a larger emphasis/importance on modesty are not also focused on Jesus. That’s not my business to say any more than it’s some one else’s business to make rules about what I should or should not be wearing, and it’s not at all what I was attempting to say in this post.

**Please keep the comment friendly. I recognize this is a controversial topic, and there will be some that disagree. Just please remember to season your words with grace, refrain from swearing and just generally be nice in whatever points you would like to communicate. Thanks!