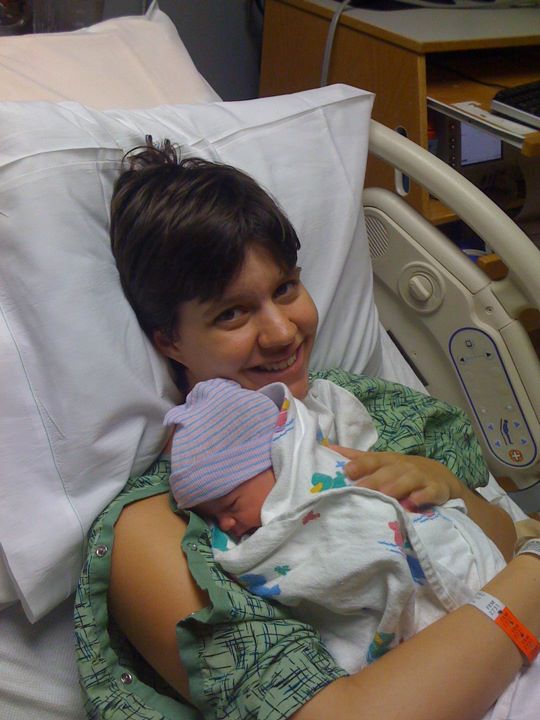 I had been having contractions for a month before baby girl was born. Not just the irritating braxton hicks contractions but some real ones that would bring tears to my eyes. Some that would be every 5 minutes for an hour or two, and some that were just really intense but didn’t last for long enough to be “labor”. One day I was having cold sweats and extremely nauseous for no reason when the contractions started…all these symptoms of labor (but no baby)!!! I think I counted 7 times that I “should have” gone to the hospital, but each time I waited a bit, just to be sure, and the contractions would always go away after a couple hours.

Sunday morning 5 days after my due date contractions wake me up at 5am. They just keep coming and coming, and decently close together as well as consistent timing. I text my MIL at 7 just to alert her that this might be something for real this time because these contractions were more intense than most of the contractions I’d been having all month. The biggest difference was that I could feel these in my back as well as my belly. I got up at 7 with Little Man, gave him breakfast and started getting ready for church. Things calmed down after I started moving around and the contractions had quit entirely by the time we were ready for church just before 9. Oh well, another false alarm I thought.

I just felt yucky though. all through church and after I felt sickish, so I took a nap. I woke up from the nap with MORE contractions but nothing close together where I would think it was labor. They were intense but that’s it. Hubby asked if I wanted to do something so we decided to go walk around the mall. (I figured that would either stop the contractions or get them going better, I was okay with either) We walked around for awhile and I figured out that they were coming every 20 minutes. HARD contractions. I had “bloody show” in the mall bathroom, which was exciting and was the only “prelabor” symptom that I didn’t already have. As we were leaving the mall I told my hubby “I think this is actually it this time.” He was skeptical, and we drove home and continued our evening as normal. I cooked dinner for every one and put our son to bed at 7. I would pause every 20 minutes and double over in pain with a contraction for a minute but other than that they weren’t stopping me from my normal life. Hubby said that every time I’d have a contraction Little Man would imitate the face I made and start moaning just like I did. I was in too much pain to see, and he wasn’t able to get a video :( but I bet it was awesome to watch!

I remember running out of Little Man’s room after I read his bedtime story because I could feel another contraction coming on and I didn’t want that to be the last thing he remembered before I was gone for 2 days! At this point they were coming every 10 minutes and hubby agreed that this was probably it ;) 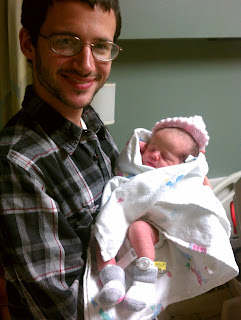 He texted his mom to tell her it would most likely be sometime tonight, but they were only coming every 10 minutes so she didn’t need to come right then or anything. I decided to watch a TV show to “pass the time” between contractions. I got about 10 minutes into the show and they started coming faster. 10 minutes. 3 minutes. 10 minutes 3 minutes and then without warning they were coming every 3 minutes! I told hubby to tell his mom to come now so he texted her. Thankfully she was just around the corner at a restaurant having dinner so she arrived pretty quick. Hubby started carrying our bags down to the car and she rubbed my back while I sobbed through the contractions that had suddenly gotten much harder. I remember at this point being TERRIFIED that this was how the rest of my life would be. That I would just eternally be in labor and the baby would never come. (funny to think about now, but super scary at the time!) she assured me that the baby would come and prayed with me. Around that time I decided I needed her at the hospital with me instead of home with Little Man. She called my FIL to come stay with Little Man and he arrived less than 10 minutes later. Unfortunately in those 10 minutes the contractions sped up again and were coming every minute. I was having a few seconds between each and it was awful. I hit the floor at one point and could barely get back up when they told me my father in law was there so we could go to the hospital. Hubby picked me up off the floor and I literally ran out of the house. Not even a glace or a “thanks” towards my father in law! I had a few seconds relief from contractions and I knew I needed to make it down as many stairs as possible while I could! I think I made it down 4 or 5 before the contractions hit again.

We live on the 3rd story of an apartment building so I had to make it down 2 flights of stairs while having contractions. Hubby and his mom helped me as much as they could but I didn’t want to be touched much so that was hard to do! As I reached the bottom step I felt her drop into the birth canal. Literally she was right there, I knew if I pushed she’d come. I couldn’t communicate this to my family because my contractions were too hard for me to get more than a word or two out so I just got in the car and screamed “HURRY!!!”

Hubby and his mom jumped in and we drove. . . My husband decided to be a good citizen and stop at all the red lights. I was screaming at him to run them, and his mom helped him turn on the hazards. I could hear her saying “just go!” but he didn’t want to break the law. Thankfully the light turned green while they were arguing and I was screaming so it didn’t end up being too much of an issue ;) At some point my mother in law turns around in her seat and sees that I’m pushing (I couldn’t help it!) she starts yelling at me not to push and at hubby to drive faster! I’m sure it would have been hilarious to watch!

We finally got to the hospital (we live less than 5 mins away) and my MIL ran inside to get a wheel chair. two nurses rushed out with one and started wheeling me in while hubby parked. I could hear the nurses talking to my MIL about how long I’d been in labor etc. and trying to decide if they should put me in triage or not. I finally looked at them and said “my babies come fast” and I guess I seemed desperate enough, so they took me to a delivery room. 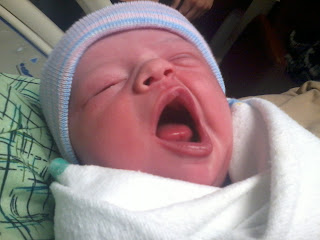 Then the nurse hands me a cup and asks me to go pee in it. “I can’t” is the only response I can muster. She gives me a funny look, and then holds out a hospital gown and asks me to go change… I’m racking my brain trying to figure out a way to communicate to this woman that I’m having a baby right now!!! I’m not going anywhere to do anything!!! I finally decided to forget trying to speak so I stand up and start stripping down right there. I’m normally and EXTREMELY modest person so for me to just strip in front of a nurse and my mother in law is crazy. But this baby was coming out NOW weather they were ready for her or not! They helped me into the gown and I got on the bed. The nurse says she’s gonna just “check and see how far along I am”. As soon as she sticks her hand up I see her eyes get HUGE and she says “that’s the head…I feel the baby’s head” and she runs out of the room to call for help. She’s back a few seconds later and they start coaching me to breath etc.

I remember thinking “hmmm hubby isn’t in here yet”and then completely disregarding that thought and pushing. push #1 (Water breaks)  push #2 I feel her crown and see my hubby step into my field of vision, still putting down the bags he was carrying in from the car. Push #3 Baby is here!!! :) Hubby got to be there (barely) and she was born at 8:30pm…less than 10 minutes after we arrived at the hospital! 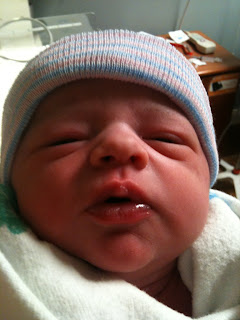 My Dr. wasn’t even at the hospital and no dr. was present for her birth. They had tried to call in an OB/GYN that works with another practice but even she didn’t make it in time. The 2 ladies that pushed my wheel chair in delivered my baby and they were AMAZING. They remained calm the entire time and were very encouraging. After she was cleaned up they looked at me and said “now that’s how you have a baby!” and I have to agree! It was super easy! Delivering the placenta was hard this time around, it took around 30 minutes and was tearing on the way out so that was a scare. They gave me a shot of pitocin straight in my thigh (OUCH!) and had to call in another nurse to help out, but it ended up being okay!

I had been feeling SO SICK the last month of pregnancy. Just plain horrible and as soon as I delivered her (and the placenta) I felt so much better! It was an immediate change and it was wonderful. I remember feeling exhausted and overwhelmed after having Little Man but I felt GREAT after having baby girl. I was super chatty and every one that came to visit commented that I didn’t look like I had just had a baby.

She figured out how to nurse right away and we got to spend almost 3 hours with her before they took her to the nursery to test all her vitals etc. :) We had to wait around for about and hour for my Dr. to arrive to stitch me up so they gave us extra time with her. It was so nice!!! She was 6 pounds 15 ounces and 19.5 inches

She was just perfect and I was so relieved to be done!!! It was such a special night. I am so glad my MIL was there for her birth, even though we hadn’t planned on that at all. It was so special having her there! Especially since baby girl was named after her! Eventually every one went home and hubby and I were able to spend some time together just talking. I gave him the gift I had chosen for him and told him how grateful I was that he was my hubby and our kids’ daddy. I tear up a bit just thinking about that night and what a beautiful time it was as our family grew from 3 to 4. It was a beautiful night, the night we welcomed our baby girl into our family :) 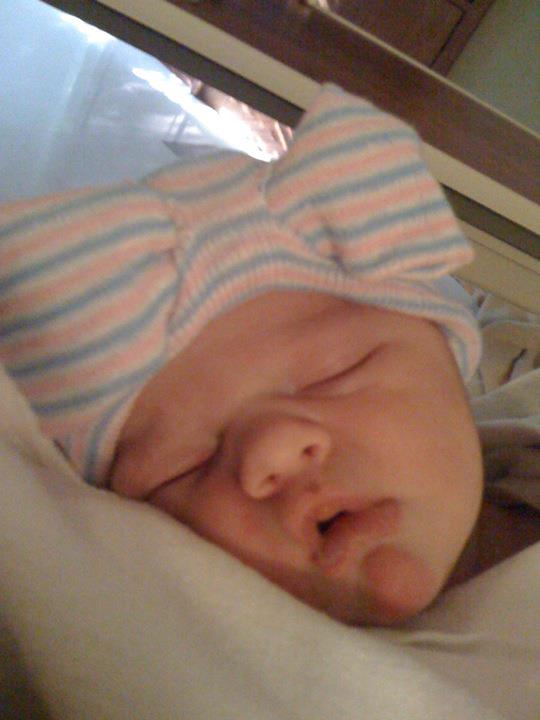