These past few months have been crazy. There has been all the normal drama that life brings. All 4 of us were sick, Little Man decided we’d go ahead and start round 2 (and then round 3) of tantrums, Princess started crawling (then walking, now running…) and Hubby has been working crazy hours. But in the middle of all that, wonderful things have been happening. Things I’ve only ever dreamed about. 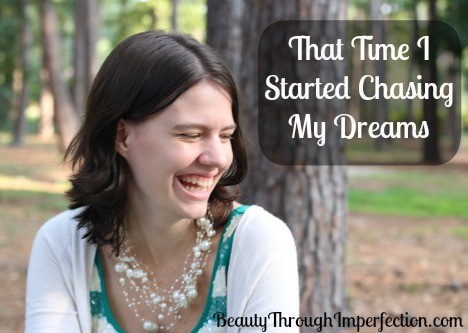 Like most kids, I had tons of dreams and aspirations while I was growing up. Most were just fads and I’d stop thinking about them after a few weeks or months but there is one that has stuck with me since I was around 8 or 9 years old; to be an author. I have tried many times to write various books but I was never able to stick with it, until last year. In 2012 I decided what kind of book I wanted to write and how I wanted to write it. I started working on the book, thinking I could self-publish an e-book and that would be the way to see my dream come to fruition. I had no idea how a person goes about getting an agent or publishing a book so I figured e-books would be the way for me.

I started writing the first chapters and making the book’s chapter outline. I loved working on it and thinking about this big step in encouraging other moms through my writing. As I wrote I came across an opportunity to take an online course (from my friend at Tiny Blue Lines) that would teach me to write a book proposal. I was floored; this was the exact piece that I was missing! The one thing that I needed to make my dream of writing and publishing print-books a reality. I signed up for the class and spent over two months working on my book proposal.

I will let you in on a little secret though. That was terrifying. Just starting the proposal was scary, but reaching the end, and sending it out to agents and publishers was like nothing I’ve ever experienced before!

It’s easy to have dreams, it’s simple to want things and imagine them coming true “one day”. It’s much harder to go for them. It’s nerve wracking to know that you’ve poured hours, days and months into something and now you must wait to see if it will happen or not. I’ve never been good at waiting, but it’s time I learned.

I edited & re-edited my proposal and query letter and I’ve started sending them out. I am officially in the agonizing waiting period that all writers and authors face. Querying agents and publishers while putting my book (and myself) out there and awaiting their response.

In this period of waiting for a publisher I am also working on an ebook. This project should be done in the next couple of months and I am very excited to share it with all of you! I can’t wait to be able to officially put the word “author” next to my name, as I publish ebooks and eventually print books with traditional publishers as well. It’s an exciting and nerve wracking journey, but I’m glad to have you all by my side!

Chasing dreams is an extremely vulnerable situation to put yourself in. This is something I’ve wanted for 15+ years and it’s finally time to do it. It’s scary, exciting and thrilling all that the same time.

But I’m doing it.

What dreams do you have? How can you work towards make them a reality? :)