Like pretty much every other person I know, I am constantly in a state of being behind on laundry.

I never catch up, ever. I may get everything all nice and washed, perhaps even dried, but even on these rare occasions, it won’t all be folded and put away.

At some point, you start to wonder if it is even humanly possible to be fully caught up on laundry, particularly when you have small children. 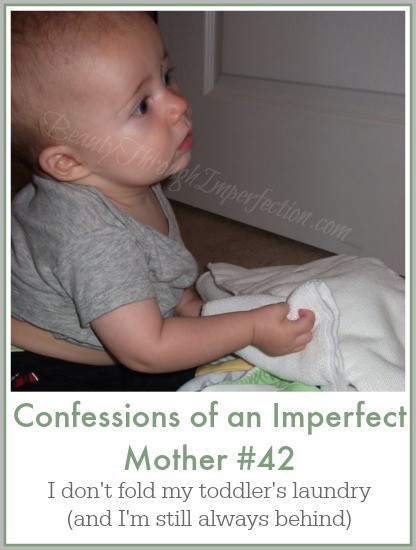 My son has been known to wear the same shirt multiple days in a row. It is usually a Pajama shirt that he wears one evening to bed, and then refuses to take it off the next morning, and the next and perhaps even the next! He stacks other shirts or sweaters on top of the favorite pajama shirt, but the beloved shirt will stay on for days at a time. Despite the love for specific shirts, we still seem to go through laundry at an alarming rate. I’m sure the cloth diapering doesn’t help in my attempt to stay caught up, but the diapers only account for 2 of the 10 loads I need to do every week.

When my son was about 18 months old (and I was pregnant with my daughter), I came to a decision. I realized that it is futile to fold clothing for my toddlers. At that time I would meticulously fold the tiny shirts and pants and then re-fold them after the toddler played with them while I was putting away my own clothing. Once I got it all in the dresser and walked away to cook dinner, my son would pull all the clothes out and throw them around the room. This would require me to fold the clothes again (or just ignore it and leave them strewn about his room out of frustration). I finally decided to just stop.

Stop folding my kid’s clothes all together. Now, they each have their own drawers, and I just shove their tiny pants and shirts in there, and that’s it. If they pull the drawers open and throw their clothes around, I can have them clean it up, because it doesn’t require any intricate folding. I can even take the 30 seconds to shove it all back in the drawer myself.

It’s so freeing, to be able to pull clothes from the dryer and just shove them into drawers. It makes me feel a bit like a rebel, and I need that in my life as a mom. So yes, I confess, I totally cut corners in the laundry department and I’m still behind on it most days.

Do you fold all the laundry, or do you shove some in drawers like I do? What household chore “cheats” do you have in your home?

Looking for more Confessions of an Imperfect Mother? See the full list, and the reason for the series, by clicking that link!