This week marks a full month since Houston was hit by Harvey. One month later and it still feels surreal.

This way of measuring time as something happening “before harvey” or “after harvey” has become our new normal. I think we’ll be measuring time that way for years to come.

Things like “How is everyone that you love?” are now standard greetings if you haven’t seen some one for awhile. This is how we try to figure out how to help our friends and families best and just be there for each other however we can.

We’ve all gutted homes and watched as people we love and strangers alike,  carry all their belongings out onto the street for the world to see. Those belongings still sit there today. Mountains of family heirlooms, that are now trash piled up and down the road for a month because there’s simply too much of it for the garbage workers to have made much of a dent in it yet.

We all seem to be settling into a new rhythm of life. Most of us are back to work, which feels wrong in the midst of so much destruction, but also is essential. Most people have added a second (unpaid) “job” to their lives and have somewhere they are volunteering and helping to rebuild. Be it friends homes, family members, complete strangers or local businesses. Everyone is still helping each other and it’s beautiful.

The last of the major shelters only closed a few days ago. People are still displaced and parts of our city still look like a war zone. There are mountains of trash from gutted homes up and down the streets. It’s been so strange explaining to our kids, who were sheltered from the worst of the flooding, why these people have couches and furniture and walls out on their lawns. The nervousness and fears of the kids is starting to go away a bit, but we can still tell they are on edge every time it rains.

You can see them making the most of it though, at playgrounds and recess, you’ll find kids playing “flood rescue” or “gutting houses” because that’s what has consumed their parents lives for weeks. So much so that it’s now a game as they process things in their own innocent way.

This used to be a "construction" outfit. Today, she came out saying she is here to knock down our walls. Apparently our new dress up game has to do with gutting houses. ? It's been a weird week. #hurricaneharvey #knockdownthewalls #sis

We’ve had two big storms since Harvey causing widespread panic among the little kids in our city. I’d be lying if I said the adults weren’t nervous too. We actively had to remind ourselves and our kids that these were just simple storms and not anything to worry about.

Most schools have started back after a couple week’s break. Though there are two local high schools now sharing a building and both doing half day classes because they expect it to take a year for one of the flooded high schools to be back functioning. A full year before life will seem almost normal again for those students. 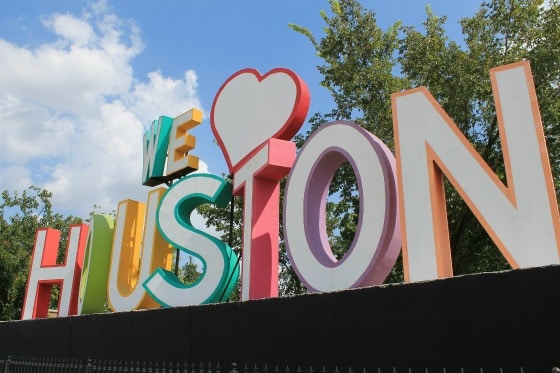 Some things are returning to normal though. It only took two weeks before I let my phone battery fall below 60%. Even pre-flood, I always have my phone at my side, like all good millennials do.  But this was different. Suddenly phones weren’t just a way to check Instagram and Snapchat, but instead my phone was my ONLY way of knowing my friends were still safe.

Phones were how we knew friends were waiting for rescue boats and how we were alerted when they got to safety. There was also the ever-present ache of knowing you might need your phone to call for help yourself so when the power was on we all crowded around electrical outlets to top off the battery. A ritual I continued for two solid weeks. If I saw my battery at something like 65% my heart would start racing and I’d run to find a charger. Even knowing that phones were no longer life-giving, I couldn’t make it stop and heard that many friends were doing the same.

One month later… it sounds so strange. Like there should be closure. Like we should be fixed and back to normal. But we’re not.

With the emergency shelters closing up, there’s now a odd rush on the cheap housing and government assisted housing in the city. Those who were homeless and seeking housing before the storm are now facing even more challenges than usual as the demand for homes they are eligible for, has drastically increased.

Grocery stores and restaurants are still closed. We’re driving 20-30 minutes to get groceries these days instead of 2 minutes like we were. Sometimes, I get in the car to drive somewhere specific, (usually for work) only to discover it’s been flooded and closed when I arrive. We’re all learning to check google before leaving the house to make sure where we want to go is actually open.

Yesterday, it took a solid two hours of trying before I could get a simple document printed, signed and scanned. My printer is broken, our local library is flooded and many places that do printing were open but not quite up to such a “complicated” request just yet. It’s things like that, that really throw off your week. Even one month later.

We’ve adjusted to grocery shopping taking 90 minutes instead of 40, but we’re still working through small, unexpected things that can consume our entire day. There’s still this patience about it all though. People are annoyed by delays like this, but with the knowledge of how bad things could have been, always on your mind, a two hour delay in your day still seems preferable to the memory of peoples homes being engulfed by water.

And those memories still haunt us… Driving down roads that I saw under 6+ feet of water a few weeks ago has not stopped being weird. I’m not sure how long that will take to go away. But it certainly still creeps me out at this point.

One month later, we’re still rebuilding. You can drive 10 minutes and see one part of town that looks completely normal, and another part that is utterly destroyed. This is all over the city. Pockets of safety and areas of destruction. Everywhere you look.

As the news attention dies down, and more natural disasters have hit one after the other, I know Houston is far from everyone’s mind. And in way, rightfully so. This will be our reality for a long time to come. But for those who have been specifically asking about how to donate to the continuing process to rebuild, here are a few local organizations that are helping and will continue to help long after some of the larger relief organizations have moved on to more urgent needs.

Fund for families affected in the Houston School District

Redeemed Ministries is an organization that rescues young women in Houston from human trafficking. One of their safe homes was flooded. They were able to get it fixed enough for the young women to come back but there are still repairs to do to get it back to how it was.

NBRI – is a non profit based in Houston that works with a few organizations in Haiti and Guatemala. Since their home base is here, they’ve mobilized some teams to help with relief work in the NE Houston area. See more about what they are doing here.

Tony’s Place – Works with homeless teens and young adults in the Houston area, especially those in the LGBTQ+ community. They partner with the Salvation Army’s YARC to serve the young adults in our area that are trying to find jobs, further their education and get housing.

The Houston Food Bank – has been around as long as I can remember, and still continues to serve our community well.

There are so many other wonderful organizations doing amazing things for our city, these are just a few that I personally know of that are keeping the funds local and will continue to be working here for a long time.

Thanks for all the thoughts and prayers for our family and for my city through this whole thing. I have appreciated every comment, prayer and message sent after all of my posts about Hurricane Harvey. Your words and encouragement meant more to me than I can say.