Do you let your toddlers fall? 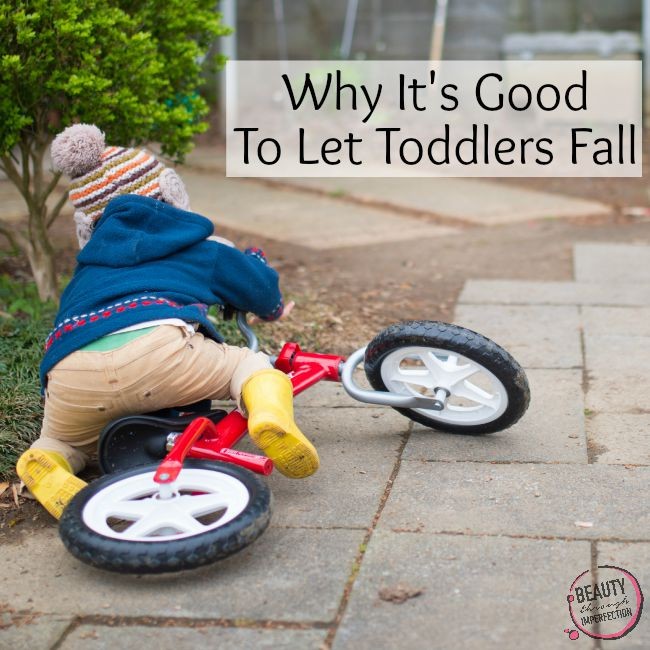 I’ve gotten quite a few odd looks in my years as a mama because both of my children are climbers. My one year old would scale the top of the highest play set at the park while I’d see moms of two and three year olds hovering behind their kids keeping them from falling off the small sets built specifically for toddlers.

It’s two different ways of parenting, and I don’t think my way is specifically “right” and the other “wrong”, this is just what is right for our family.

I let my kids fall.

Now, I’m not talking about letting them take a dangerous tumble off a six foot slide, I’m talking about when they climb up something a few inches high and lose their balance. I watch, I guard their head, but I let them feel the pain of falling.

This might sound crazy. And believe me, sometimes it takes all that is within my mama-heart to keep from catching them every time, but I don’t.

Before you think I’m an ogre of a mom, hear me out. I let my kids fall because I don’t want them to get hurt. I want them to learn that slipping can lead to pain, that not being careful can harm them.

My children are natural dare-devils. They’ve always climbed everything they could see. Insetad of stopping them, or hindering them, I let them climb a lot. I watch them to be sure they are safe and sometimes watch them take a tumble. I want them to fall of low objects, in a controlled environment, so they don’t try to climb something higher before they are ready. So they know about gravity, even if they can’t put so many words together.

Because of this, my kids learned their limits early on. I can watch them climb up steps at the park, much higher than my own head and know they won’t go toddling off. They know what happens when they fall and they are careful not to let it continue happening. They are strong on their feet and confident as they go up. I see them stare at bigger kids playing and watch as the calculate and try to figure out if they can handle the task themselves.

Sometimes they ask for help, sometimes they go it alone and other times they decide they aren’t ready and try something else. Each time I’m there to play the role they need from me. To watch, to help and to support.

If it is something dangerous, something that would mean injury if a fall were to take place, I’m there to catch them every time, but I seldom need to. I’ve let them fall off tiny things enough that they are confident when they face the big stuff. They’ve never been bruised or injured by their controlled falling, just enough of a bump to let them know it happened.

I can’t help but see this as a metaphor for our lives going forward. Allowing them to fail, to take chances and try new things and receive the consequences for what they’ve done. Letting them learn and grow in their own way and giving them the confidence that I’m always there for a hug, but I wont’ always keep them from their consequences and growth.

Do you let your kids fall?