This is a sponsored conversation written by me on behalf of Chuck E. Cheese’s. The opinions and text are all mine.


After school time can get crazy. The number of calm hours in the day is reduced a LOT Monday-Friday. Before school we’re all rushing to get ready and make sure the kids actually brushed their teeth. On a good day, we also make sure they both flushed the toilet before they scamper off to school, but that gets forgotten a few too many times a week (seriously, the oldest is six, HOW IS IT THAT HARD TO REMEMBER, BUDDY?)

Evenings are a bit better, but not by much. We don’t have homework yet, but we do have an early bedtime to contend with. They are home for two sweet hours and then life becomes a whirlwind of dinner time and baths and getting ready for bed.

I think I’m really starting to understand what they mean by the days being short.

Life is passing by super-quick! While I love our chaotic lifestyle, as the kids get older we are seeing more and more the benefit of slowing down a bit, and finding special moments to spend with them throughout the weeks. Easy ways to say “I love you” in a way that makes complete sense to a four year old and a six year old.

This week, it was a trip to Chuck E. Cheese’s in the middle of the week. The kids did NOT see it coming and it was hilarious to watch them try to guess where we were going the entire time we were driving.

There were cheers and giggles from the backseat as soon as we pulled into the parking and they saw where we were headed. 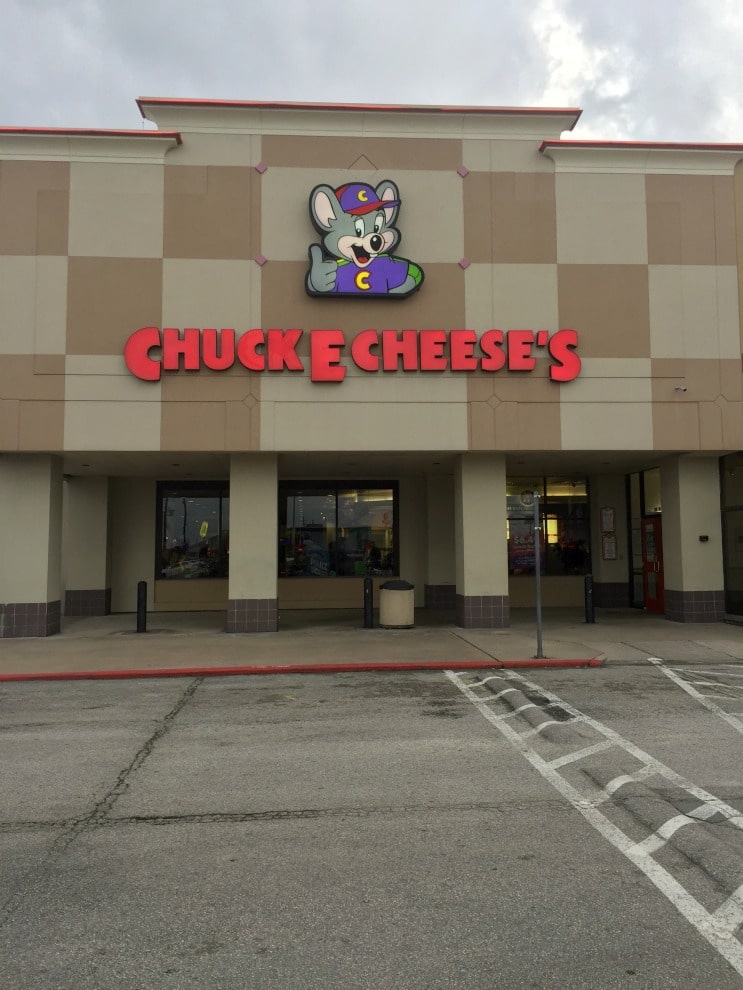 I had never really thought about how this is the PERFECT after school activity. Most special things we’ve tried to do, end up making the day feel MORE hectic and rushed because we’re squeezing in something fun and trying to get home in time to cook dinner.

This time, we had dinner at Chuck E. Cheese’s an then got to play until it was time to go home and get ready for bed. 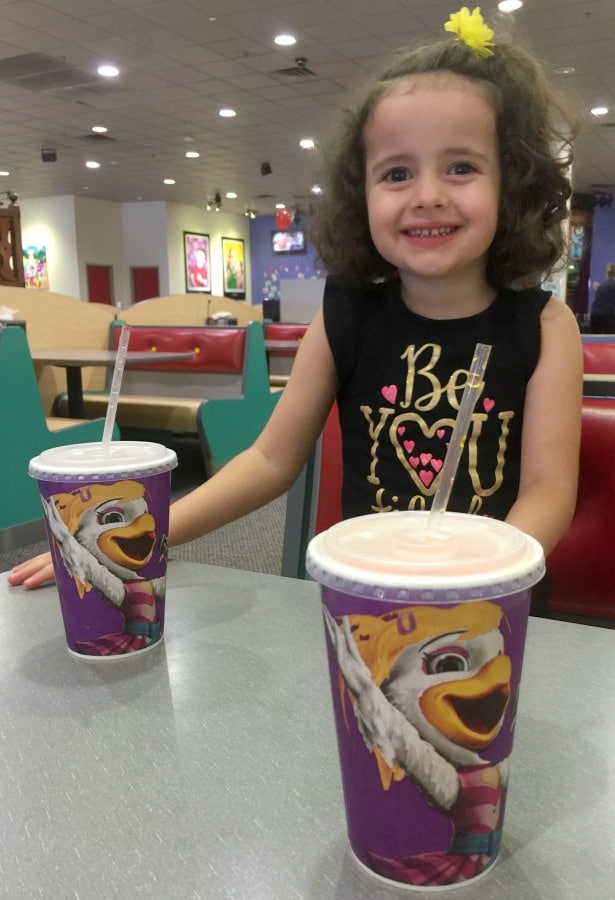 They gave us the deal where you get a large pizza, four drinks and 30 game credits. Even though ours was a part of this review, just looking at the pricing my husband and I were both impressed at how much we could do on a budget! See latest deals here. The food pricing was comparable to other kid-friendly eating establishments, BUT play credits were included with the price so we got to spend hours playing with the kids and not just eating together (and trying to corral them in a restraunt, because let’s be honest, that’s usually what eating out with kids entails).

I also appreciated that entry was FREE. So you only end up paying for what you use, like the tasty menu options or simply tokens for playtime with the kids! 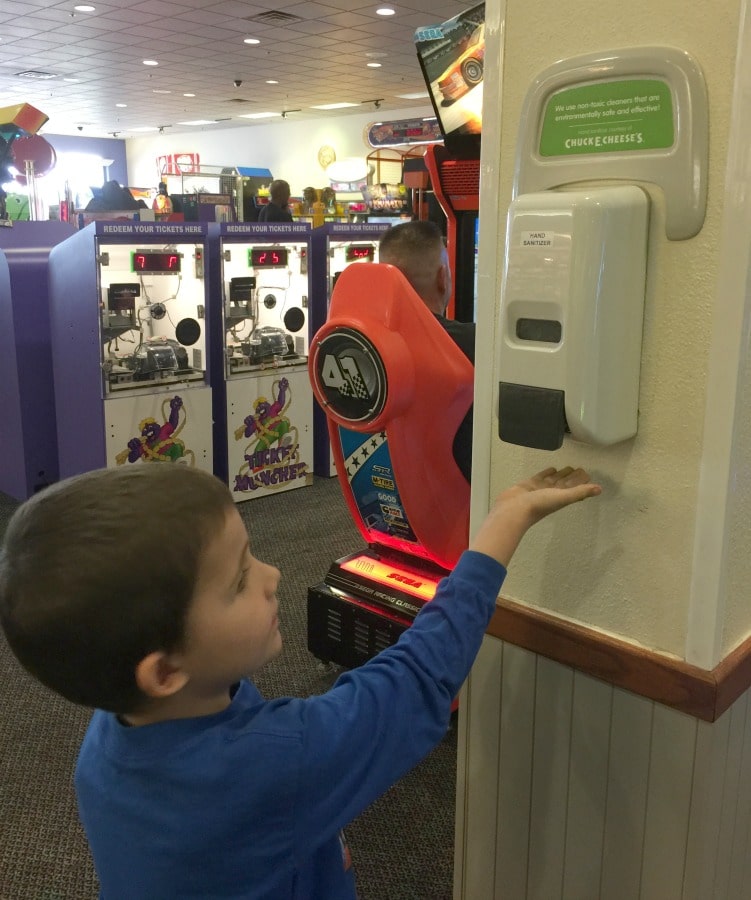 One thing I loved is that they’ve partnership with Kids Play Safe to implement healthy and safe cleaning practices nationwide. This has earned Chuck E. Cheese’ the Kids Play Safe Certification…which means it is the first major brand to be recognized for its commitment to safe, clean and eco-friendly places for its guests. This certification is awarded to businesses that ensure safety and health of children!

I loved seeing the hand sanitizers throughout the room so kids and adults can wash their hands before and after playing on the machines. 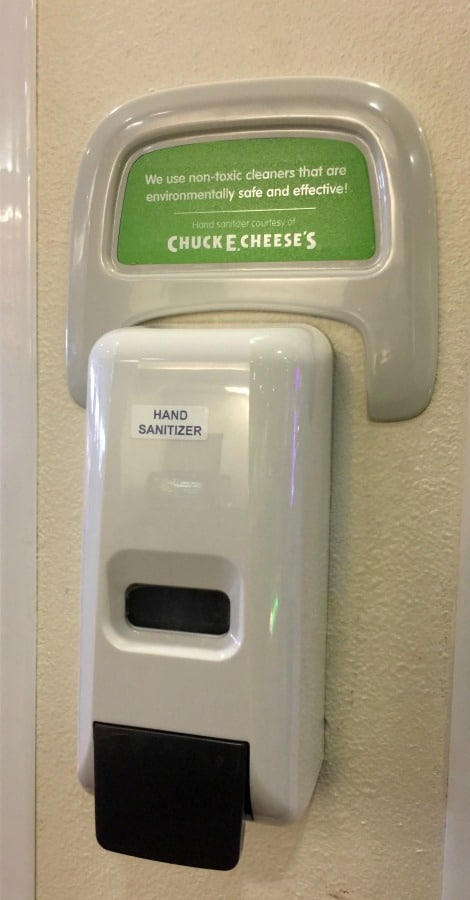 We washed up and then we were off to play! The kids were overwhelmed at first (in a good way) trying to pick what to ride or play. We started off with a Cars racing game and they loved it! 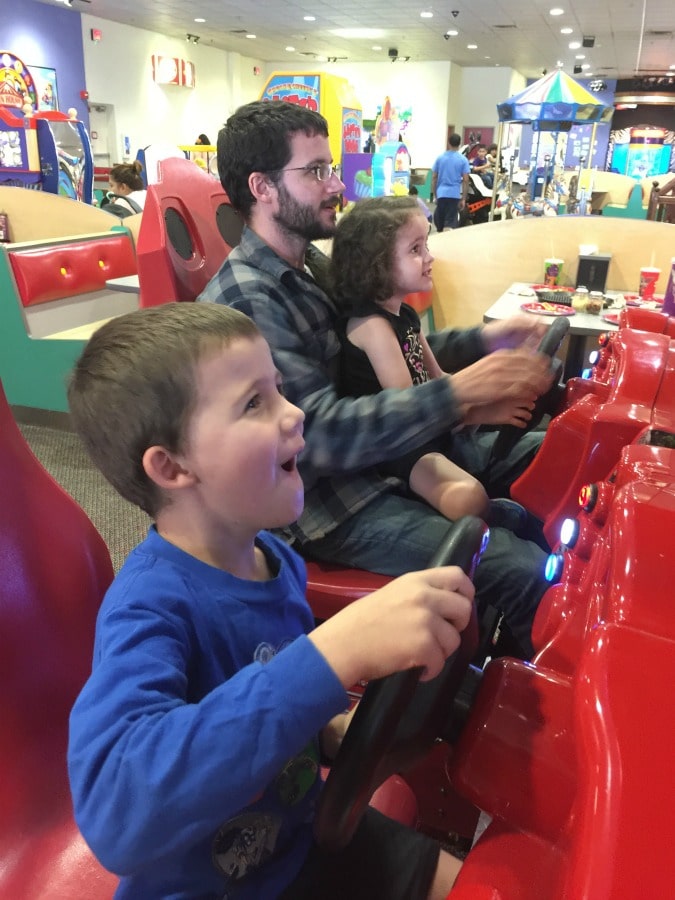 Sister was a little bit too short to reach the pedals so daddy helped her. I’m not sure how they did it but this game made steering a lot easier for the kiddos, so they actually felt like they were racing. I highly recommend this game for kids if you make it out to your own Chuck E. Cheese’s soon! 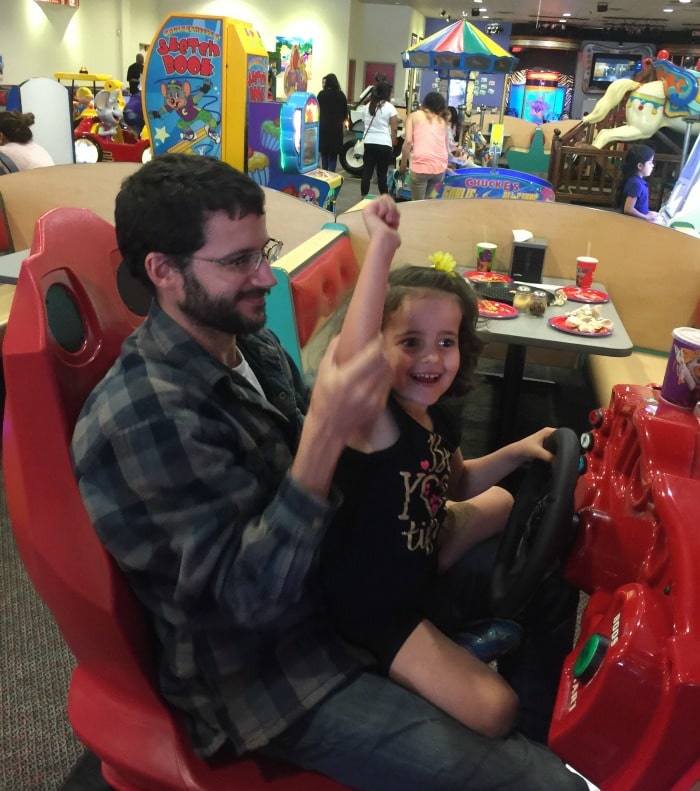 Sister was pretty excited because (with some help from daddy) she won! 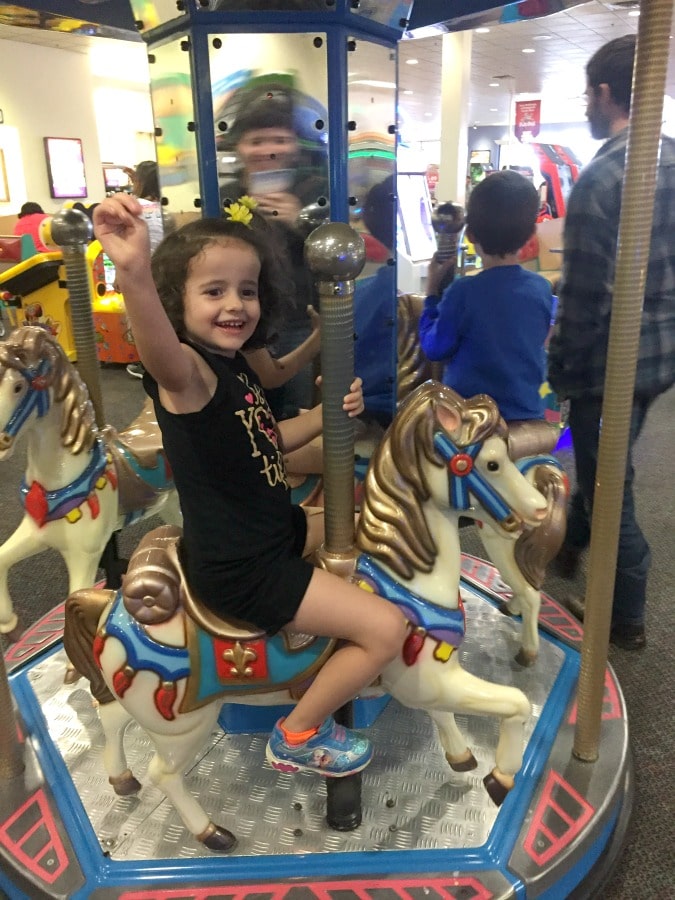 There were several rides that two kids could do at once, but only having to pay for the ride to go ONE time. I was impressed at how far our 30 game credits went because of this. We were there for a long time, and still had a credit or two left over for next time. 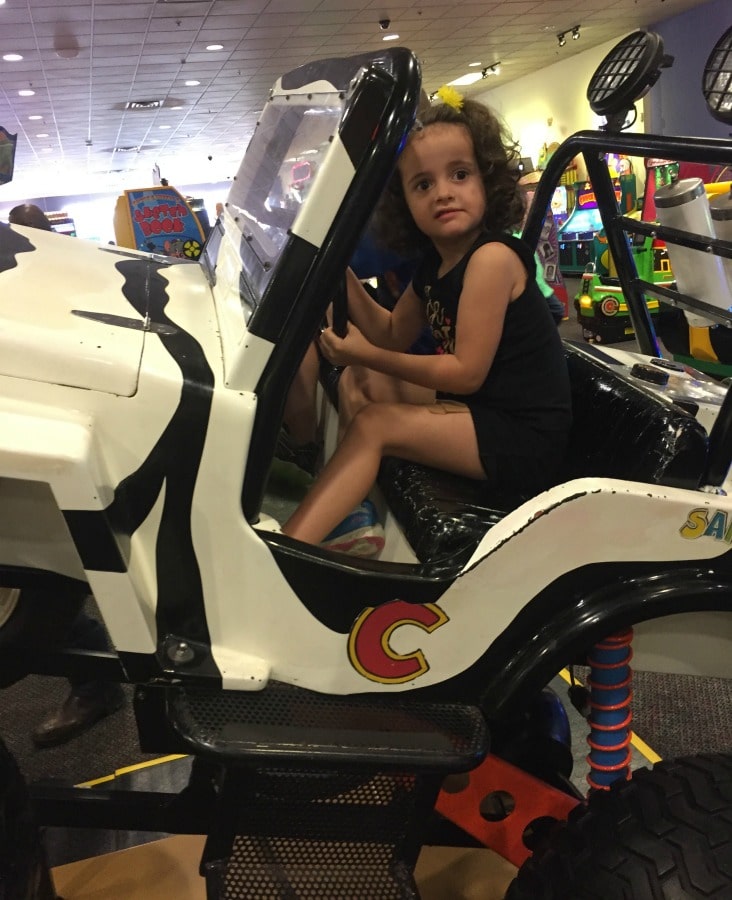 The highlight of the trip was definitely this monster truck simulator. They insisted on riding it twice so each kiddo got a chance in the drivers seat. The truck went up and down AND side to side so they felt like they were on an epic safari adventure! 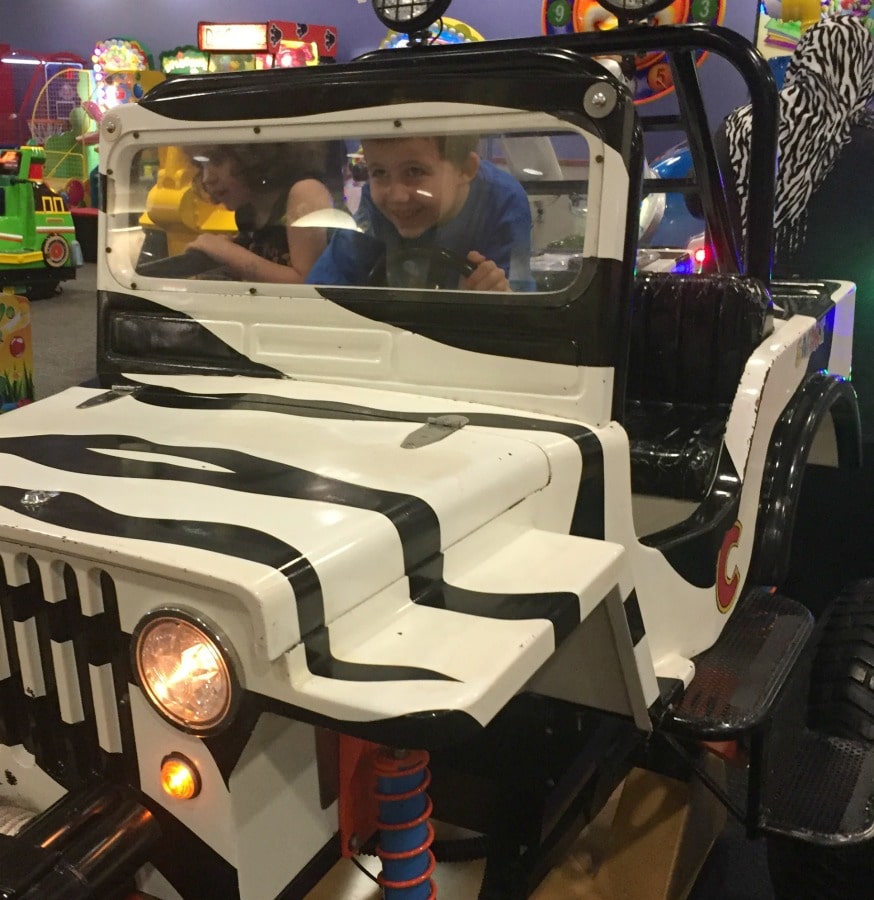 Honestly, if there hadn’t been so many cool things in the room, they probably would have been content to ride this one for an hour.

The size of the play area was something else I was really impressed with. I had sort of expected the kids would have to be waiting in lines to play some of the more exciting games like the monster truck, but we never had to wait. There were plenty of kids there, but because there were so many choices, it was easy to choose one that was available and then circle back a little bit later to something you wanted to play that another child was using. 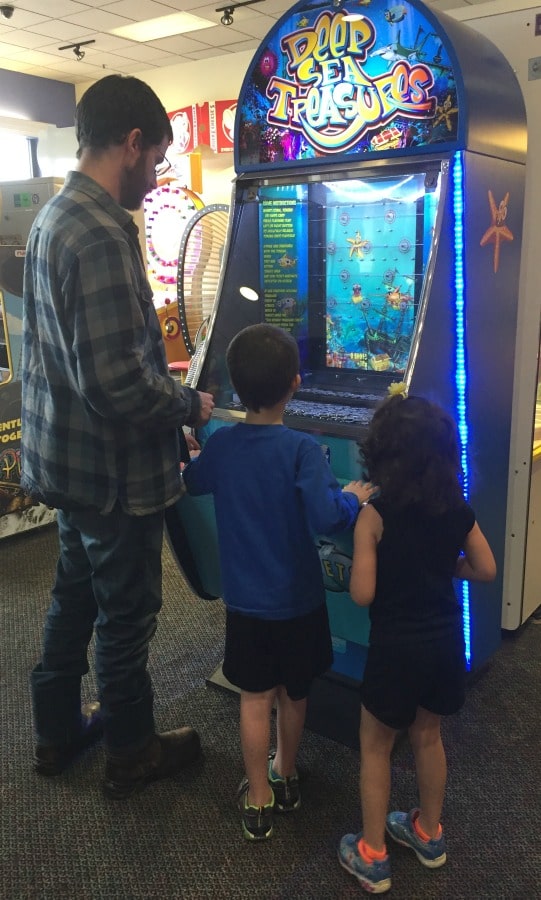 There was NO down time or waiting our entire evening, which was awesome! Especially since we only had a couple hours to spend there between school and bedtime.

I heard that one of the reasons parents love Chuck E. Cheese’s too is because of the free wifi. I saw signs about it, but we never tried it out. Our kids are still at the stage where they want to do EVERYTHING with us, so we were running along side them cheering for them as they played the games.

When our kids hit the independent stage where it’s more fun to do things solo, I can see that wifi coming in really handy though! 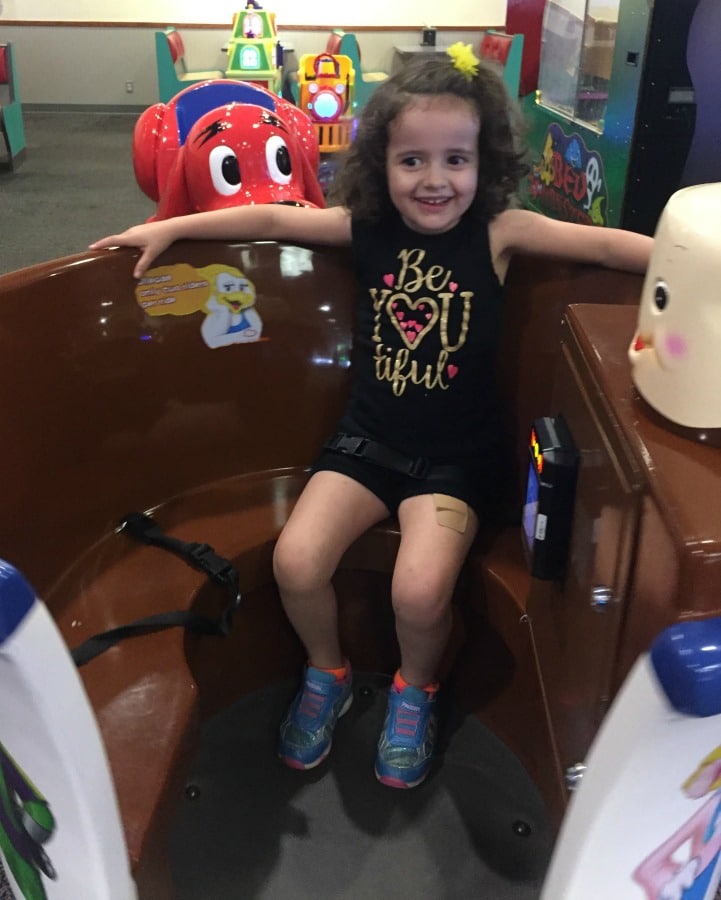 At the end of our time, we got to exchange tickets for prizes. I was SO thankful to see ticket-counting machines. You simply feed all your tickets into the machine and print out a receipt and take it to the counter. This meant no waiting in line at the counter for every kid to count their tickets and then order their prize.

We ended up with enough tickets for both kids to get a top and a sticker sheet and they were THRILLED. 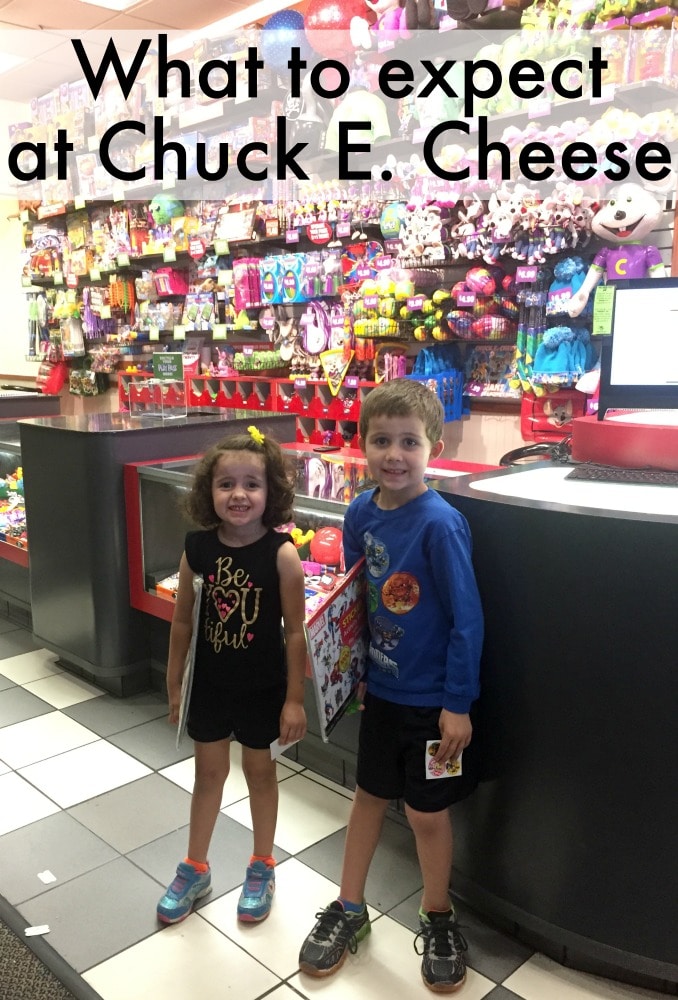 On the way out I noticed that they were doing child checks. I wasn’t sure what that meant until we were leaving.

As we walked in they  gave us all an invisble marking on our left hands. I thought this was just so we could run back out to the car at will, but it was actually a lot smarter than that. It turns out, they give everyone in a family the same number on their arm. THEN when you’re leaving they shine a black light on the numbers to make sure the kids belong with the adults taking them out.

With so many kids running around in one building, I LOVED seeing this extra safety measure being conducted with such care. And the kids loved the invisible ink and felt like spies.

All in all, we had an amazing time, and it’s something I’ll be keeping in mind for future after-school adventures when I know our family needs that extra time to connect in the middle of a crazy week.