Stress free potty training for girls and boys? Is that even possible? I say it is!!!

Potty training is notorious for being a stressful time. I’ve been nervous about potty training since the day my son was born! But it’s happened, he’s potty trained and it wasn’t a big deal. I read a LOT of potty training books, the boot camps, the 3 day methods, the weekend methods and more, but none of them seemed like the right fit for my strong willed toddler. 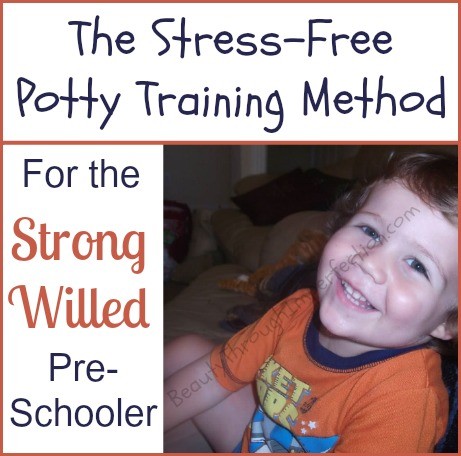 My boy can be quite stubborn when he wants to be, he’s not the best with structure, I knew we would have an all out war in our home if I tried to force him into it. He and I both go stir crazy if we don’t get out of the house everyday, so I was also uncomfortable with doing any of the 3 day/weekend methods that are so popular right now.

Before I explain any farther, I will give you a bit of context. When Little Man was bout 18 months old he was ready to potty train. He was interested, he was excited about it, and ready, but I was 6 months pregnant and didn’t have the energy to deal with it. This would have been the perfect time to do the 3 day method and I feel confident that it would have worked then, (especially this method my friend Becky has shared with me). But I missed that window of opportunity and he became disinterested and a bit more stubborn. So when I did my “wing it” or stress free method of potty training, he was already 2 and a half years old, and it worked perfectly.

Sure, all kids are different and all kids will respond to different things, but if you have a wild one on your hands like I do, this might just be the perfect potty training method for you! This was also the ideal method for our family because I knew I wouldn’t have help for a 3 day method or boot camp, since my husband works 6 days a week. I’m on my own most of the time with the kids, and I’d be unable to give Little Man the 1 on 1 attention that one of the more intense methods requires.

So I decided to wing it and do a totally unstructured version of potty training. I guess if I had to break it down it looks like this:

The details: I bought the new underwear, and I showed him how to use the potty one day, when he seemed particularly interested. Then, each time he wanted to wear his new underwear, he had to use the restroom first, or at least try. Some days he was interested, some days he wasn’t. We could go a week with no thought about underwear or potty training, and then the next week he might want to do it every day. It was up to him.

He had a few accidents while wearing the underwear, while he figured out when exactly he needed to go to the bathroom. It was’t a big deal though, and he caught on pretty quick.

He slowly started wearing underwear all the time when we were at home, and I would change him into a diaper for bedtime and whenever we went out in public. I wanted to have a full week with no accidents at home, before I started braving taking him out of the house in underwear.

A week passed and he was accident free at home, so I let him start wearing it when we were out for the day. He went several days with no accidents, but then had a little slip up when we were at my in-laws for a full day.

I’m still keeping him in diapers for nap and bedtime, because he’s a deep sleeper, but he’s 100% potty trained otherwise! He can climb up onto the big potty himself and he can remove his own underwear (needs help getting it back on).

This has been much easier than I thought it would be! No fights, no stress and tears, just moving towards the goal at his speed.

Sure, this won’t work for every one, but I thought I’d share our experience since it is different than most that I’ve read in the past. It’s not really a method of its own, other than following the child’s cues and doing what he or she is comfortable with. I encouraged using the big potty a lot, but didn’t force it. I still frequently remind him to “listen to his belly, and go potty when his belly tells him that he needs to”, but other than that he’s golden.

I was surprised that potty training could be done without a rigid method or any stressful days, but it can!