If you’ve been on the internet today you’ve noticed that ihop is changing it’s name to ihob. As in “international house of burgers”

Obviously the internet has exploded and everyone has OPINIONS. Here’s the best of what Twitter is saying, everyone from Wendy’s to Chrissy Teigan

While the internet argues, I believe there’s lots to learn here from the CRAZINESS that is ihob.

Ihop didn’t just change it’s name overnight. They announced on June 4th that this change was coming and got everyone talking about what the b might stand for. Breakfast? Bacon? Bad Idea?

The buzz lasted a few days and was just dying out when they made their announcement one week later.

If everyone hadn’t been trying to figure this out for a week, they would not have made NEARLY the stir that they did today. People would have been confused, but gone about with their day.

Instead, they build suspense.

People felt invested in this change, as they argued over what it would be.

Now, they announced it and everyone wants to continue the narrative.

They took a risk building excitement like that, but it paid off in a big way. Just look at Twitter’s trending topics today: 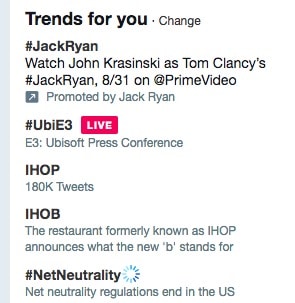 If their goal was to break the internet today, they are succeeding.

Which brings us to my next point

Be careful if you decide to rebrand

If ihop is rebranding – they’ve just caused a lot of brand confusion. Which is not good. Everyone who loves their pancakes is now confused about the direction they are going in.

People go to ihop for breakfast. Honestly, that’s the ONLY reason you go to ihop.

If they are trying to change that by this rebrand, they are on shaky ground. People will lose confidence in their brand because they seem to be abandoning what they are good at and what they are known for, to make a new name under something no one was really looking for.

We all have our favorite burger places already, so no one is going to go running to ihop/ihob for just the generic word  “burger”.

If they wanted to do a true rebrand it should be more about what they are becoming and less about abandoning what we already loved about them.

And that’s just off the top of my head…

If this is truly their new brand, I think this was a huge miss. They haven’t told us much about what they are becoming other than burgers. And burgers are not that impressive on their own.

If they wanted to create a lunch/dinner restaurant, it probably would have been better to start a new chain under a new non-ihopy name that did burgers with a unique twist.

Trying to turn a breakfast brand into a burger brand just doesn’t make sense. You’ll lose your breakfast people and likely not gain many burger people.

How to make the internet buzz

However, if this is all a huge publicity stunt, I say hats off to ihop/b. They have succeeded in getting EVERYONE, even competitors to talk about them. If they are wanting to let us all know they launced a new burger line (and all will be back to normal with the pancakes later) then this, my friends, was nothing short of brilliant.

And this is where it’s important for creative marketers like us to not be afraid to think outside the box. To do something so wild and crazy even your direct competition can’t help but talk about you and create more buzz about what you are doing.

The best part about all of this is that every time Wendys or Mod Pizza or Whataburger tweets about them, it’s only making them MORE viral, and getting more people to know that they just launched a line of burgers. There will be people heading to their local ihop tonight just to see what the madness is all about.

When you do something crazy…people TALK.

It’s up to you to make sure that the thing they are talking about (even if they are making fun of you) is so spectacularly awesome, when the people come to you out of simple curiousity they are BLOWN AWAY with the quality of what you are offering.

I am not sure that’s what ihop is doing here, but it should be!

Keep your long-term goals in mind

I don’t know what ihop was trying to accomplish today, so I can’t say for sure if this was a successful campaign. If they are trying to rebrand, I’m going to say long-term this is a flop. BUT if they are trying to stir up some drama for the day, and promote a new line of burgers, then I am calling this a huge win.

Note: I keep seeing conflicting evidence on whether this is temporary or a long-term change if anyone has proof one way or the other let me know!

Either way, this raises an important point for marketers – make sure that you have clearly laid out your long-term goals so that your marketing campaigns can help propel you forward.

If you don’t have a long term goal, or you are just grasping at straws aimlessly in a last-ditch effort to make a buck STOP. Take a moment to plan out where you want your business to go and then plan a marketing campaign that will work for you. (I can help with that if you are stuck)

Lastly, we can learn a HUGE lesson from all the other brands weighing in on this controversy. Some are doing it better than others.

We all saw Wendy’s tweet immediately in their own sassy way. It was hilarious and likely helped contribute to the virality of this whole topic, BUT it really didn’t make me want to go to Wendy’s any more than I already did. They did okay on brand awareness and riding the viral wave, but I have to give today’s marketing trophy to Chili’s.

Chili’s did something genius… they weighed in, threw a little shade and used the opportunity to tell the world about their own new burger. This burger looks DELICIOUS and is every bit the epic burger that ihob should be talking about in their own marketing today.

We don't usually throw shade, but seriously? That's what all that was about? Here's a real burger for you. #ChilisBoss #IHOb pic.twitter.com/eTVmtd9vir

Chili’s didn’t just say “hey we have burgers too” but they responded with a VIDEO of the most amazing burger I’ve ever seen in my life (seriously, burger + sausage + bacon + brisket + a ton of other stuff). I can’t remember the last time I went to Chili’s… quite possibly more than 10 years ago, but today? I WANNA GO.

They showed me what’s on it, they proved why they are better than literally every one else talking about burgers today and most importantly, they seized a moment in internet history and used it to their advantage in a way that most of the other places talking about ihob today didn’t.

I laughed at everyone else’s jokes, I’m still scratching my head about ihop/ihob, but I want to go to Chili’s for dinner.

And that is what living in the moment and being ready for any opportunity that comes your way is all about.

What about you? Have you been watching this whole ihop/ihob drama unfold? What do you think we can learn from it?

I want to leave you with inspiring words from another tweet, because I saw this and just had to smile. 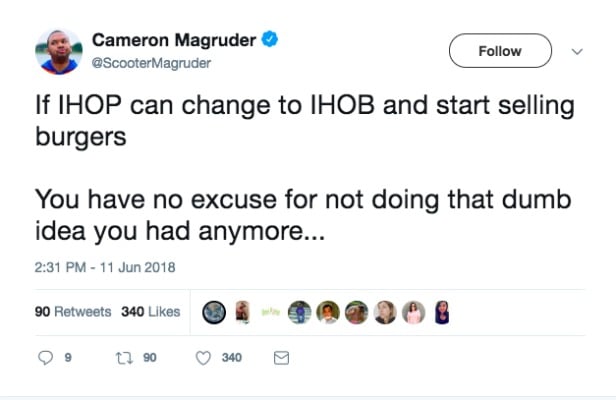 Don’t be afraid to try something new! You never know what might catch on, or what might take the internet by storm! For better or worse, you might be the next ihob, if you just give it a chance and put your ideas out there!