For my son’s 2nd birthday we did a Dr Seuss themed party! I shared about all the decorations and fun Seuss-food we served. We went all out for this party and had a lot of fun, but the best part was definitely the Dr Seuss cupcakes! These would also make a super fun summer activity for older kids! 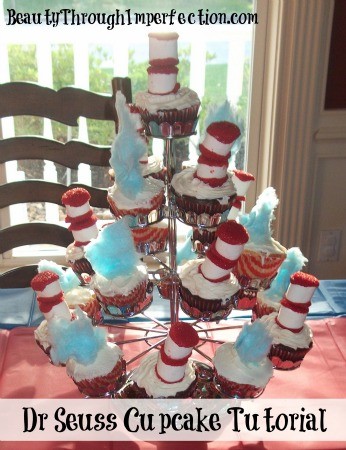 Half the cupcakes I made were Cat in the Hat and the other half were thing 1 & thing 2. Every one was so impressed with how they turned out, and they were surprisingly easy to make, albiet time consuming. We used a simple white icing for both types of cupcake. I would suggest using a bag to apply the icing rather than just a knife. This gives a more full effect to the cupcakes and makes it easier to attach the marshmallow hats.

For the cat in the hat design you need: 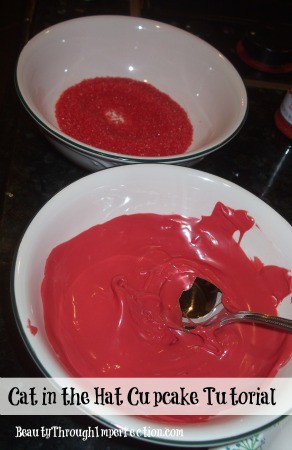 Once the candy has hardened stick a toothpick all the way through one marshmallow and halfway through the next. There should be a small bit of toothpick left sticking out of one of the marshmallows to pierce the cupcake for stability.

This design is a bit more straight forward. While the icing is still fresh add a tuft of the cotton candy to the top. This works best with freshly iced cupcakes, but if you are using cakes that have previously been iced you could just add a dot of fresh icing to the top so that the candy will stick. 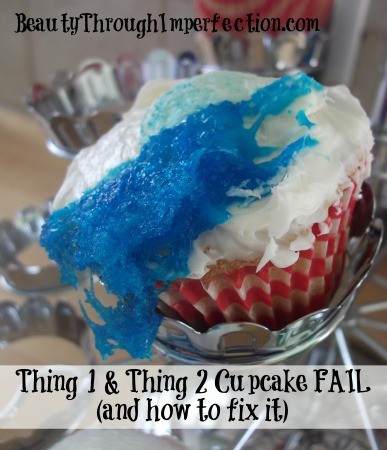 So there you have it! these were super fun to make, and every one enjoyed them! Can’t go wrong with extra candy on top of a cupcake!!! To add another cute flair check out this DIY cupcake stand to learn how to make your own cute place to hold them!

Do you have themed birthday parties for your kids? Have you ever considered doing a Dr. Seuss party either for a birthday or just for fun? 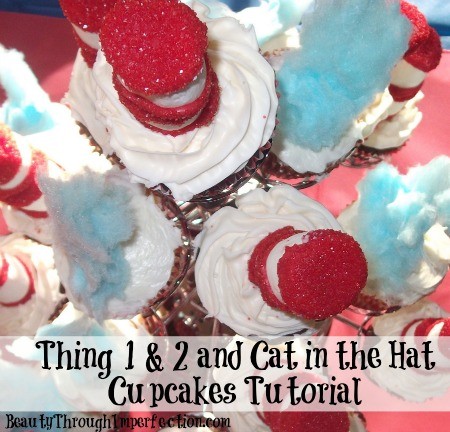