I am so excited to share this room reveal with you all today! It was a challenge to find ways to decorate and organize in our little apartment, but I made it happen. In case you missed the “before” pictures, you can see them and check out where we started from by visiting this post.

I love organizing, but I’m not very good at finishing big projects. A lot can be blamed on the fact that I have 2 little ones underfoot all the time, but I’m trying to get better about it. This is my first big accomplishment. But enough of all that, on to the room reveal!

Step one: I moved all the toys etc. onto his bed. I knew I was going to be moving his bed to the other wall, and putting his dresser where the bed is in this pic, so I wanted to be sure I vacuumed the parts of the floor that were visible both before and after I moved the furniture. 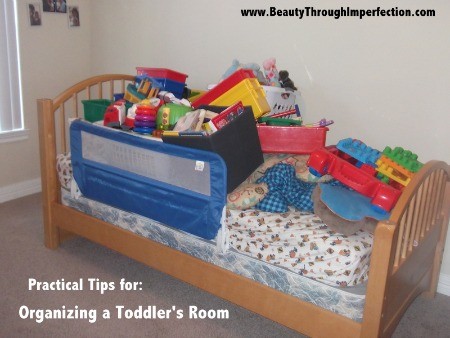 After vacuuming I moved the bed to the opposite side of the room and put the dresser in the middle of the wall where his bed was standing in the previous picture. I had to do this so that he would no longer be able to use his bed to climb into the crib on that side of the room. Lots of effort, but it worked out ;)

After that I started organizing all the books. Little Man has a LOT of books. I have had trouble keeping his books organized though because he is too young to be able to put them away on shelves and there were too many books for the small storage boxes that I had origionally bought for them. The boxes were so small that the books had to be stacked in just the right way, and that was just not do-able for a toddler. I finally figured out that I could get a large laundry basket and that would be the perfect size for them! It is sturdy so I don’t have to worry about him breaking the basket (another problem with my previous boxes) and it’s large enough that he can fit all the books inside it, even though he’s not able to stack very neatly yet. 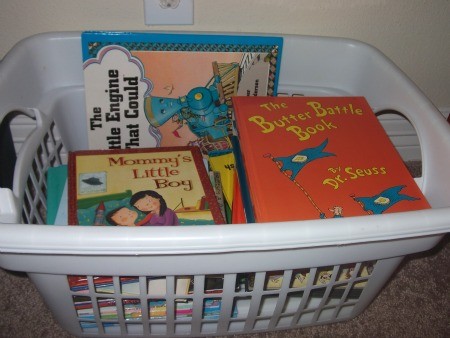 Even the obnoxiously large children’s books fit in the laundry basket, stacked in the back. Since his book collection is so extensive I am still using one of our old boxes to store all the baby/ board books. I’m not sure that he knows how to tell the difference in book type yet, but even if they all get mixed together there is room for all the books, and he can easily clean them up on his own. 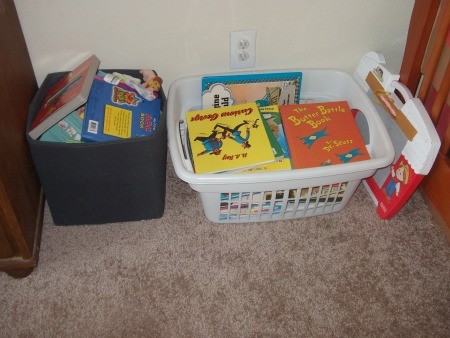 Sticking with the the laundry basket “theme” I used another one to store all his stuffed animals.  In the past, I just has all his animals stacked agains the wall, but that obviously ended up messy all the time! I love using laundry baskets in his room because they are so sturdy! My son is one that dumps toys out of their containers and then uses the containers as chairs or step stools, so I needed something that would last and wouldn’t break under his weight. 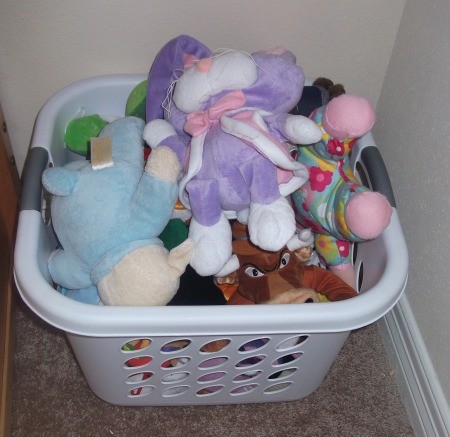 Next, I used his colorful bins to organize his toys. I have a shelf that these bins fit on, but he always liked to bang the shelf against the wall, and he always took the bins off the shelf anyways, so I removed the shelf from his room. Little Man is old enough to understand  (with prompting) which toys go in which color bin. I think after a few days he will know which toys to put where without my telling him. 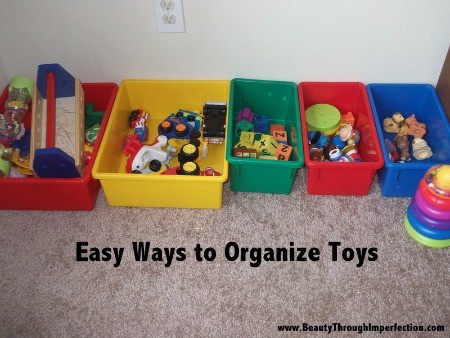 *not pictured: I hung an over the door laundry hamper on the door to his room, so I can keep his dirty clothes out of his reach, but conveniently inside his room as well. Having it hanging there has been working great for us, but I didn’t get a good photo of it. You can see the type of hamper I’m talking about here.

After I got all the toys organized it was on to the fun part…Decorating!!!! I had previously had the nursery done up in green and yellow with a frog theme, but now that he’s getting older I wanted to change it up a bit and add things that he’s interested in now. I kept the hanging letters that spell his name and the 2 pictures that my grandmother cross stitched for each of the kids when they were born, and took the rest of the “baby” decor down. My son loves the Dr. Seuss book “oh the places you’ll go”, so he was really excited to see the banner and “balloons” going on his wall. 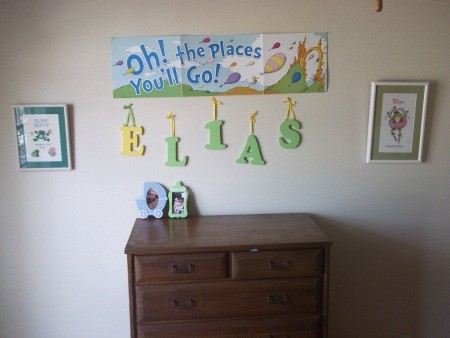 Below, is another angle of the same wall. I’ve passed my love of pictures on to my son, so I hung a few photos of him and a few of his favorite people on the wall near the window. He loves looking at the pictures and pointing out each person. There used to be one more photo on that wall, but Little Man found a way to knock it down so he could sleep with the photo of his Auntie (thank goodness for plastic frames, no glass!!!). The Fox in socks images on that wall are actually teacher supplies that we ordered from Amazon. You can also see in this photo how I lined his larger trucks up underneath his window. 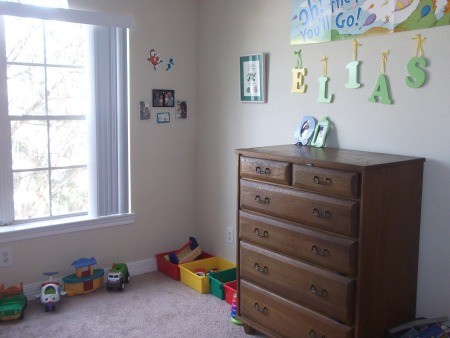 A few months ago we purchased a lot of Dr. Seuss themed Teacher supplies as decorations for Little Man’s 2nd birthday party, I saved all the decor and decided to use them to decorate his room. As I said before, the boy loves to read, so he recognizes all the characters and book cover print-outs that I hung on the wall, and was absolutely thrilled to see them going up. I found that teacher supplies are a great and cheap way to decorate a room, especially if you don’t own the space you live it. I was able to add so much personality to Little Man’s room for very cheap, and without breaking any of the rules of our apartment complex (no painting etc).

These are hanging up near the ceiling above his bed. You can see a bit more of the decor in the picture below, along with my sweet hubby sitting on the bed <3 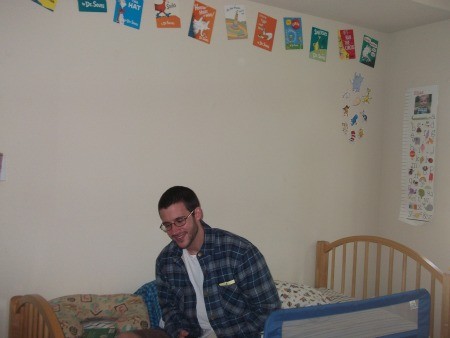 I left the space in the middle of the wall blank, because I’m planning on making a huge poster collage of photos of different family members and friends that Little Man loves. That way he can look at the pictures as he falls asleep. I’m still choosing pictures to use in the collage though, so it will be awhile yet before it is finished. 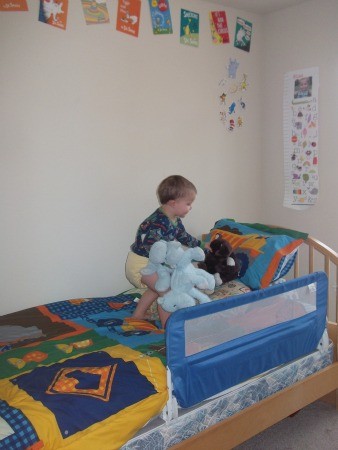 So there you have it! As I’m writing this it’s been a full week since we cleaned and organized his room, and we are doing a good job of keeping it fairly picked up. He’s still a big fan of making messes, but we’re working together to pick it up at least once a day if not twice. It’s still a work in progress, but we’re getting there! 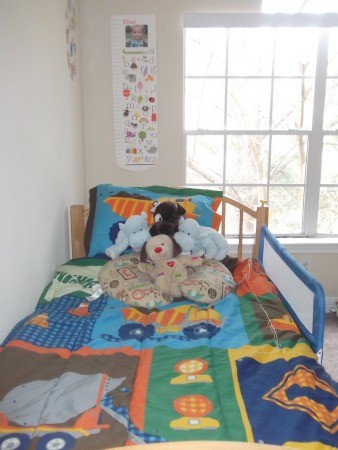 What about you? any tips or tricks in keeping a kid’s room clean and organized? I would love to hear them!