Is toddler biting an issue at your house?

This seems to be a common one that parents of one, two and three year olds will face at some point or another. Right up there in the “frustrating toddler stages” with tantrums and not sleeping through the night.

Biting is a bit trickier though, because it involves other people. While tantrums are irritating, at least they don’t leave teeth marks.

A popular parenting solution these days is to bite the child back. The theory states that in this way the toddler will come to understand that biting hurts and thus quit doing it.

I could never get on board with this method. I just can’t wrap my mind around biting my own child and it seems confusing to say NOT to do something, by doing it yourself. Mixed messages are totally not my thing so I knew this was not the route for me.

One simple phrase made all the difference for our strong willed biter.

“If you need to bite, bite yourself.”

Yes, really. I told my two year old to bite himself. And he did. He left marks the first time he did it, and then looked at me like I had lost my mind. His little eyes seemed to say “but it hurts mom!”. 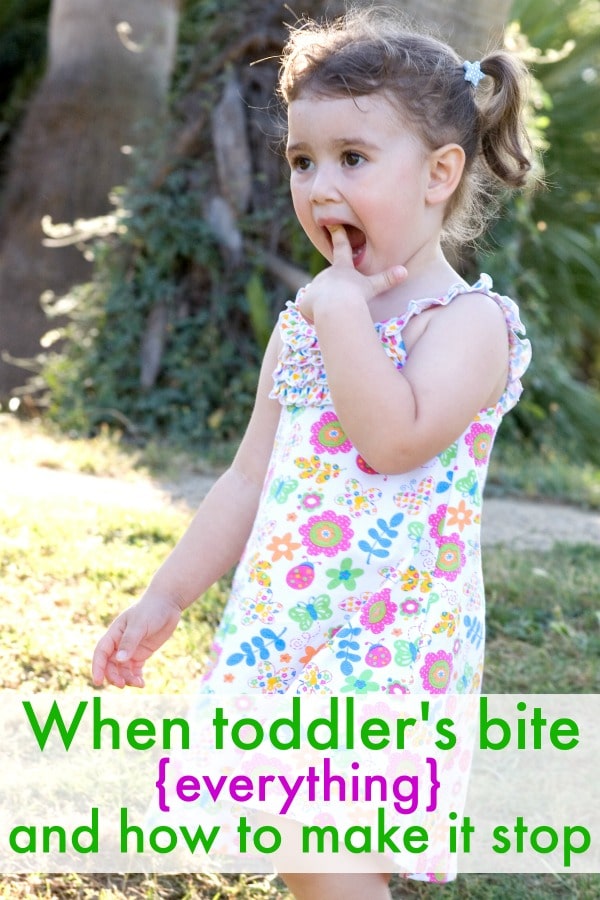 After trying it out on his own arm and deciding the biting of living things was not as fun as he had hoped, he was offered a variety of other things to chew. Cold carrots, apples, or even a frozen chocolate bar. Anything that would relieve his need to bite or sooth his gums when he was teething.

It certainly took more than one reminder. A few days later he was back at it again, trying to naw on my leg in the middle of playtime (I wish I was kidding). A quick reminder “if you need to bite, bite your own arm”, one more much softer attempt to bite his arm and then the decision that he’d much rather participate in a different non-biting related activity.

Such a simple thing but it curbed the biting in our house before it became a habit! Do you have biters? How do you deal with biting toddlers?

If you need more advice, try out this biting bear idea I learned from a daycare employee I used to work with. 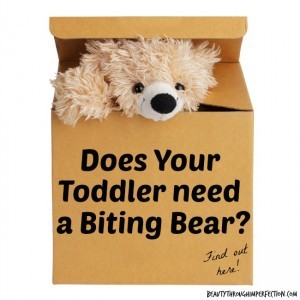 Try these resources from our affiliate