I recently wrote a post about the reason my kid cries in the store. Most of the time, it’s not because I am ignoring them or am a sub-par parent. Usually it’s because I’m a good mom. I’m enforcing rules and not giving in to their tantrums and whims.

Opening this discussion has also opened a can of worms. Comments on the post are already exploding and I thought I’d share a few reasons why I DON’T leave the store when my kid starts crying.

Usually it’s short lived. When they see they aren’t getting their way and I’m not giving in, they cool it. they also know that if the tantrum persists there will be consequenses for that, so it’s usually just a matter of getting the tears and disappointment under control. Rushing them from the building would only heighten their emotions, and also likely create a greater disturbance than the initial working through of tears.

I have to buy food. While there are wonderful seasons of life in which I can go shopping for groceries sans kids, there have also been many seasons when I have no option but to take my kids with me. I don’t think children should be viewed as a burden or blight on society and so yes, I’m going to the store with them and I’m going to buy what we need. Sure, I do everything to make sure they are well fed and well rested before we darken the doors of any store but that doesn’t mean every tantrum can be avoided. Tantrums are inevitable sometimes and we just deal with them.

Leaving the store sometimes means giving in. Oftentimes kiddo is fussing because he/she WANTS to leave the store. If i just walked out the door every time a kid cried, I’d never get shopping done and my kids would quickly figure out that they could get their way simply by raising a stink. That’s not something I am going to teach my kids. 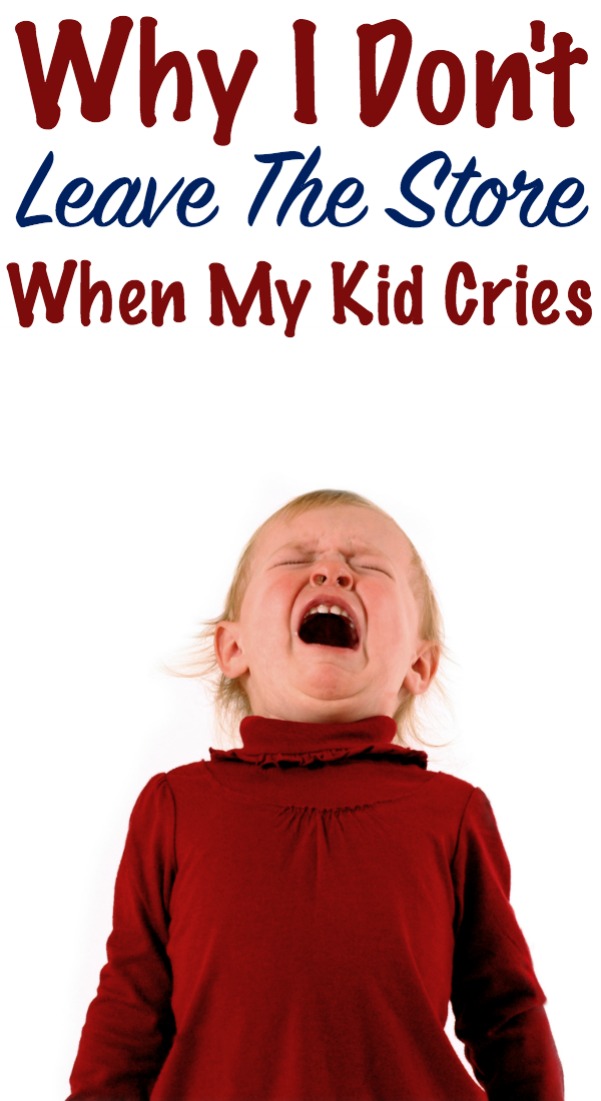 I shop at appropriate places. If I was at a 5 star dining location, the first whimper from my kiddo and I’d be out the door. Actually, I’d never go to one in the first place with kids, I know it’s not going to end well. The same goes for super-fancy quiet stores. I just don’t go to them. There were entire periods of my children’s lives when we avoided certain locations because people go there and pay for an experience, and children would put a damper on that experience. This is not true for places like your average grocery store, Target or Walmart. The latter are kid-friendly locations. If you are going out and expecting a quiet, noise-free, stress-free outing, you don’t go to those places. If my kid whines or even throws a fairly short-lived tantrum in one of them, I’m going to muscle through and teach my kid the lesson that the world doesn’t revolve around him.

So, if you see my kid crying in public, know that I’m dealing with it and teaching my child. You know, that whole village thing.

Also, if you see some one else’s kid throwing a tantrum in public, maybe shoot them a grin, remind them they’re a great parent and know they every one has trouble managing their emotions from time to time, that’ part of being human. As adults, we usually learn to handle it better, but kids are still learning that lesson. I just want to let them learn in a way that is safe, calm and that doesn’t teach them it’s fine to throw fits to get their way.

Related: why tantrums are okay

So yeah, kids throw tantrums. And that’s not always a sign of bad parenting, sometimes, it’s a sign of good, intentional parenting with a child who is still learning. Let’s all be more gracious with the way we let parents, parent and kids learn.

Get more encouragement STRAIGHT to your inbox and one of our ebooks, Confessions of an Imperfect Mother FREE by subscribing below.